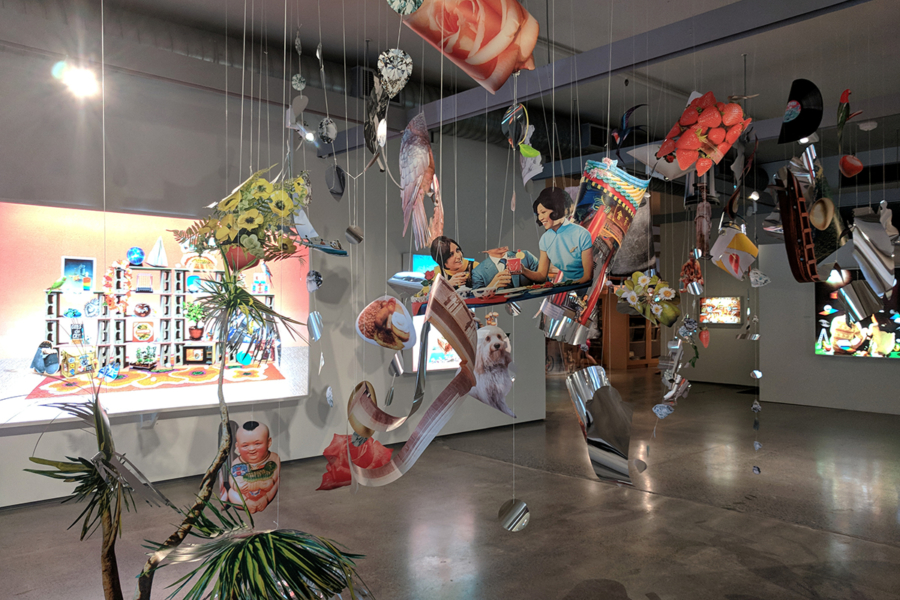 The late 90s for me were spent being towed from gou ma to yi yi in the back of a sticky Honda Civic. At each stop my siblings and I would sit in terrified silence, guarded by a small yet aggressive terrier while our parents and elders poured tea and exchanged news from their homeland. Ailments real and imagined were fretted over, compliments made over the cultivation of tropical plants, while time moved as slowly as the swollen summer heat.

At the end of this ordeal we would be repacked back into the Honda Civic and waved off to our next destination, but not before the compulsory exchange of identically shaped boxes. So frequently did we receive these rectangular gifts that I didn’t need to unwrap them to know what was inside.

My favourite biscuit, secretly, was the pink wafer – an unsophisticated tile of snow white icing sandwiched between layers of crisp, deep pink wafer. I’m not sure where this tradition of exchanging Griffins Samplers came from, whether it was just my family or not, but it somehow became synonymous with these visits and how I remember my family.

When I encountered this red box of assorted biscuits again after several years, it was at Pātaka Art + Museum in Porirua, at Kerry Ann Lee’s solo show, Fruits in the Backwater. It was early summer and I had just made the long drive down. The cool and dim of the gallery was momentarily disorienting, but this disorientation gave way to wonder as I stood in the exotic shade of glimmering palm trees, succulents, and luscious blooms.

Lee has long been an active participant in the local punk and independent music scene, and she’s been making zines since 1997, combining her graphic design training with a distinct counter-culture sensibility. This same approach is evident in her collages which mine commercial imagery and Dadaist techniques to explore issues of hybrid identity, culture and place-making.

The light boxes of Fruits in the Backwater are rich example of this – jewel-tone trinket boxes that reward the eye with close examination. Each work in the show features a tableaux of cut-and-pasted images hoarded from souvenir postcards, 80s advertising and kitsch. Verdant alpine mountainscapes rub up against icons of Kiwiana, a pastiche of the postcard image, bidding: Wish you were here.

The aforementioned biscuits appears in Trade and Exchange (hoard anything you can’t download), 2017, beside a photograph of the pink and white terraces, a Pania-of-the-reef lamp, and sub-culture artefacts such as an ACDC record and Dunedin flag. There are also cans of abalone. a money tree and lion dance mask, familiar occupants in the Chinese domestic interior. Lee, who is third generation Chinese New Zealander, has previously explored Cantonese urban diasporas within the South Pacific in her works. In this show, her sleek compositions occupy a third space that straddles both domains of insider and out through the juxtaposition of cultural signifiers.

Kerry Ann Lee, Trade and Exchange (hoard anything you can’t download), 2017. Courtesy of the artist

This is also evident in a large mobile-like installation that occupies the centre of the gallery. Paradisiacal foil-backed cutouts of succulent strawberries, pink parrots and faceted jewels sway alongside images of Chinese figurines, paifang and a coiffured woman in cheongsaam clinking glasses with a white couple.

Lee’s exhibition is filled with this kind of seductive imagery, oscillating between a globalised vision of the Long White Cloud and an intimate knowledge of it’s nuance. The objects she selects become denarrativised from their commercial contexts creating powerful hooks into personal memories and reveries. It is here that the artist is is at her most potent; she is a hoarder of eclectic icons which she uses to navigate complex cultural terrains.

Yet there’s also an ambivalence to Lee’s works that raise a critical lens about constructed notions of identity and place. A scene from Illustrious Energy (a film recounting the hardships of early Chinese gold-miners) sits within a shattered panorama in Magic Mirror, 2017, while exotic fauna, souvenir plates and tropical scenery are scattered throughout her compositions, suggestive of a longing for elsewhere: Wish I were anywhere (but here).

It’s this restlessness in our nation’s psyche that Fruits in the Backwater speaks to – our endless speculation and comparisons with what lies beyond, our fear of missing out and our reluctant isolation. In the exhibition text it states that the show was initially conceived as a response to Lee’s sojourns across South America, Asia and Europe. Paradoxically, these experiences did not galvanise her with a global outlook; instead it gave her pause for introspection, and the opportunity to ask why not here? 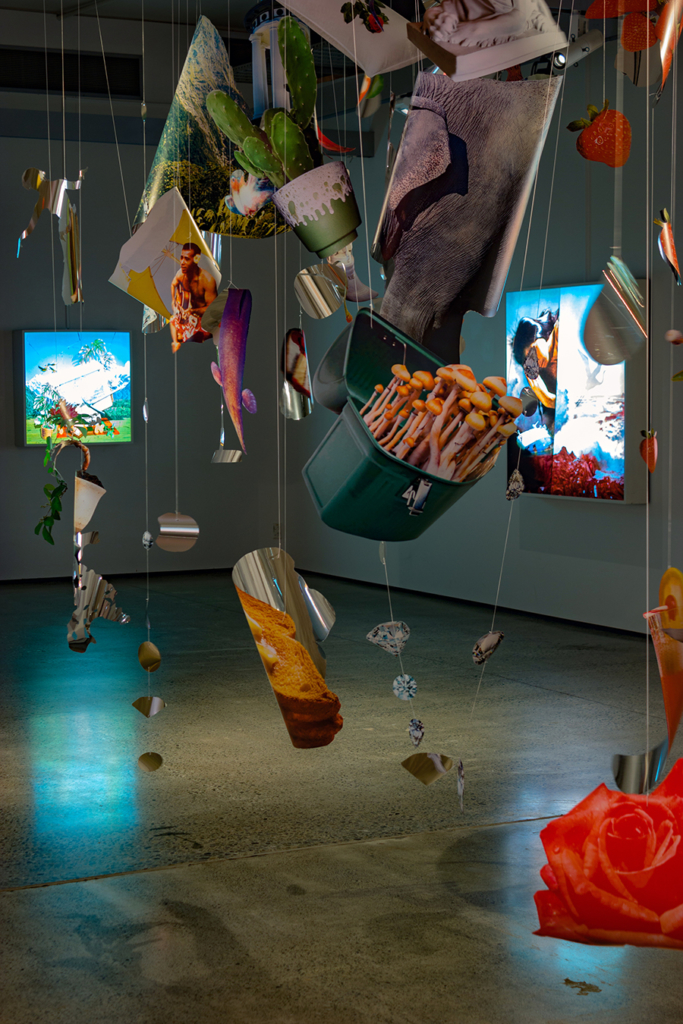 Nowhere is this conflict more evident than in a companion zine which features pieces of writing from long-term collaborators and friends. A poem by Dominic Hoey sings a roguish lament about Auckland where “cash rules everything around me which is why the bus is late/and all the graffiti’s commissioned none of the fights are worth winning/no one’s interested in your life just what you do for a living.” A long-distance conversation between Lee and MS reveals the romanticised longing each has for the other’s hometown, Wellington and New Mexico respectively. On its own, this publication is a real delight, equal parts pensive, poetic and entertaining, a testimony to Lee’s acumen at pinpointing and drawing together independent narratives that frame a discussion of what it means to operate in the periphery.

On the long drive down to the Hutt and Porirua, I flicked out this publication and the viewfinder attached, lazily scanning the arid Central Plateau through the aperture. The words THIS IS A POWER TOOL were stamped along the inside and as the world rolled by the passenger window I wondered if perhaps by shifting our frame of reference we could remake the world as we needed it to be.

It’s this constant reframing that animates Lee’s exhibition and what makes it such a captivating show, as each turn around the gallery unveils a new kaleidoscopic dreamscape. Here is where migratory currents converge, where cultural detritus accumulates like so much flotsam on the shores. This intermingling of foreign bodies enriches the ground beneath us, cultivating difference as a vital resource. If we could make use of these resources, as Lee urges in her zine, we might be less anxious about what’s happening out there and more focussed on fixing the things that we can. That might be too much of a rose-tinted vision for some, but perhaps we have already reaped the benefits. If only we might remember it.