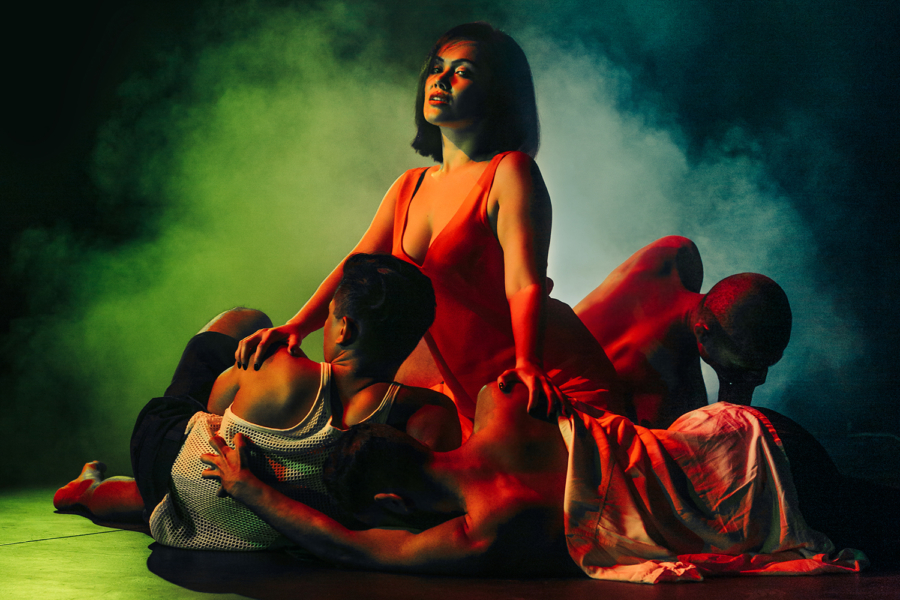 Orientation, presented by Q Theatre and Proudly Asian Theatre as part of MATCHBOX 2018

Orientation is presented by Q Theatre and Proudly Asian Theatre as part of MATCHBOX 2018. The show runs from 5 – 15 September 2018. Book now via Q Theatre.

In a western colonial context, the Asian race is in a collective condition of sexual, political and social emasculation, stripped of any capacity for the agency and strength within traditional assumptions of masculinity. Through a cis and heteronormative lens, Asian women became submissive-small-exotic-hyper-sexualised-tight-vaginas, Asian men feminine-small-dick-too-short-too-skinny-not-manly-enough.

Orientation investigates interactions between Asian male sexuality and Aotearoa’s western colonial context. Mei (Natasha Daniel), a Chinese-Pākehā woman notices that she had only dated pākehā men. In the attempt to reconnect with her roots and fend off internalised racism, she decides to start dating Asian men. Mei moves through the play dating three men of different backgrounds. Unexpectedly, what is revealed to her is an entangled clutter of racial politics, interwoven with sexuality and the pursuit for love. The play delves into the social condition of Aotearoa, unraveling the politics, displacement and contradictions of the Asian New Zealander’s sexuality.

Accompanying Mei’s journey of “rooting her way back to her roots” is the Everyman (Kyle Chuen), the abstract construct that is each Asian man and all of them as a whole; and the three people she dates: Filipino body builder Kace (Marwin Silerio), Indian film maker Dhruv (Mayen Mehta) and Singaporean actor Thomas (Eugene Yao). The cast delivered a dynamic performance throughout and there are perhaps too many good moments to count. Apart from the overall great delivery of comedy and choreography, I found Natasha Daniel’s climatic duologue with Kyle Chuen and Martin Silerio’s moment of vulnerability especially implicating.

The show opens with the familiar track of Made in China by Higher Brothers, and moves on throwing in an abundance of things that are symbolically Asian. In fact, the play is bursting of them: dumplings, mango, lucky cat, Jackie Chan, Steven Yeun, kumara farming, poll tax, it goes on and on. This is not to say the show relies on these symbols to construct a superficial representation of ‘Asianess’, as each symbol carries with them their own complex genealogy and political implications. It seems to me that director Chye-Ling Huang is fully aware of the absurdity in using a plate of dumplings to represent east Asian identities, this absurdity is played up instead of avoided. This play could not have cared less about perfectly crafted impeccable representations. On the contrary, the use of cultural symbols is trivial and bleak, seeking to blow mono-dimensional representations into pieces.

Alongside the dumplings and dragons, there are five personal journeys of juggling an Asian sexuality in contemporary Aotearoa. These characters appear flawed and contradictory, much like the society they reside in. They were allowed to be politically ignorant or superficial, to be internally racist only dating white people, to be politically aggravated but simultaneously bowing to societal pressure, or to accept tokenisation on the path of career development. There is a multiplicity of how Asian New Zealanders respond to their context, and a commitment towards this multiplicity is evident throughout the play. These are Asian New Zealanders’ stories that seeks to not abbreviate a large community to a single point of representation.

On the other side of this multiplicity, dialogues establishing the characters of Kace, Drhruv and Thomas at times felt lengthy and sluggish. This is perhaps a symptom of attempting narrating multiple stories with elaboration. Luckily the play was able remain energetic by interlacing narrative with its more playful elements: illustrating sex with explicit choreography was hilarious, the ensemble of “Asian men” created interesting juxtapositions, and the dragon and toast puppetry was also a nice touch.

Proudly Asian Theatre handed us a thoughtful play that is very much like our identity politics: complicated, confronting, contradictory, funny, messy, all with a touch of bleak absurdity. As the pieces fall into place and each character resolve their story, Orientation seems like less of a play about political aggravation or sexuality, but one of survival by negotiating with your environment.