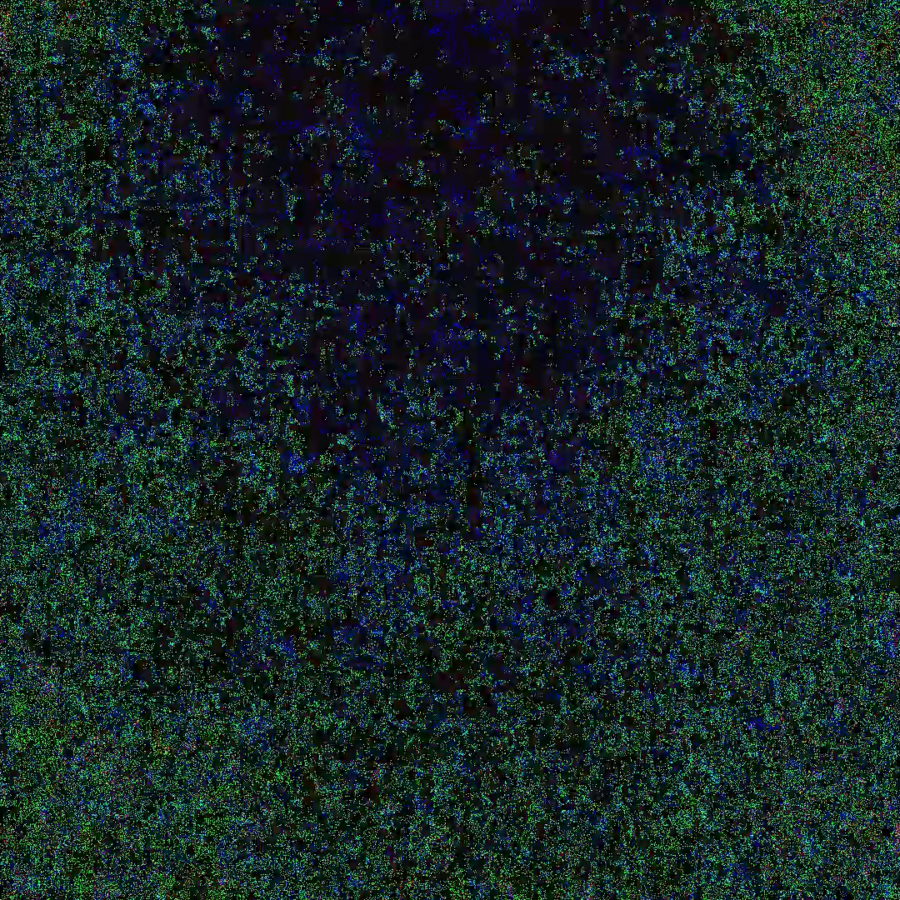 The Ache is leaving. Three years languished by dead end jobs, drugs and friends. Last week above a bagel store, the sun morphs mute amidst travelling clouds, indifferent fluctuations of light on an otherwise featureless day.

You arrive a tight knot of anxieties over a moment in time that could only have arrived after its departure. The Ache welcomes you into their sparse interior. You trace last month’s 21st across the black mould complex; navigate piles of stacked boxes, unsure if anything is inside of them.

“I always make the best friends in departure,” the Ache says, flipping a plushy up and down by the waist.

“Maybe you can only love that which is already lost,” you reply, with an insight a friend will give you a week later.

The acid tastes bitter under your tongue. Small marks your body bursting, a glowing radiance of interconnections you’d always had but only now begun to feel. The Ache follows suit and you sit on the couch together to watch .hack//Legend of the Twilight. The come up entangles you in the spectacle; the screaming boy protagonist, the chipped tooth gag, the moe sister in need of saving from the liminal space of dead code. You take part in it; you revel in it. Bodies morph on the surface of the screen in hyperflat obscenity, their parts interchangeable to the affect of the drama. Faces invert, break and disfigure, before reformation into the self-same identity form.

A month earlier, you’d hosted a house show at your flat. Too anxious to perform you’d dropped a tab as you’ve done now. An overbearing sensation of too-much-ness — of sickening reality — washed through the nexus of your being. You writhed on the ground screaming into a microphone as a cacophony of sounds roiled through you. Everyone cheered.

The floor rose later that night. A damp, disgusting intensity that triggered contractions in your throat and chest. Pulled to the ground, you fought off your bandmate’s advances, too shocked to express your revulsion and horror, to react accordingly, to reconstitute a border of consensual sociality. You broke free and slurred “I’m no one’s! I’m no one’s!” before running out of the room. Hours later, you tried to comfort them. Weeks later, you realised how fucking bullshit that had been. Months later, you learnt their friend had committed suicide days before the show.

Back in the lounge, a prince rides onto the screen on a pig. You turn to the Ache and say, “This is fucking awful.”

The Ache responds, “I know right?”

Outside the world burns blue with lustre. The Ache trails you and falls onto their stomach. “Oh my god,” the Ache blurts, “this is why I love acid. Everything just feels right.” They gaze wistfully at the grasses and flowers before them; catch a whiff of asphalt and nectar, intermingled. “Like, gender isn’t even a thing, you know? Just properties condensed into a legible sign to be disciplined by heteronormative governmentality.”

You continue chanting “Properties!” for another minute or two, before spotting a slug on a blade of grass beneath your feet. You fall to your knees and gasp “It’s a slug!”

You and the Ache stare at the tiny referent for an indefinite period of time, absorbed in its glistening moistures. Eventually, the Ache says “I think it’s actually a snail.”

You used to read postmodern novels on acid. You loved their exploration of hyperreality; their dissection of culture as a system of meaning that arises out of our collective, desperate attempts to overcome the indifference of facticity. Read symptomatically, culture does not reveal unseen depths in the world, but rather, constitutes shallow networks of sprawling complexity — truth effects — illusions of mastery over an, otherwise, undifferentiated and senseless becoming.

Then one day, the world overwhelmed you. Down the hall, your flatmates sounded an eternal return. As they spoke in joyous abandon you traced the lines from their mouths — found their origin in idiot artefacts of Hollywood Babylon. The joy of abstraction you once relished in your books took on an all too direct horror. You recoiled. You bound your lips in hysteria, for fear of becoming another repeating machine of an all too present culture industry. Better dumb than banal — better to say nothing at all, than everything that already was and would ever be. You cried and cried until everyone left — until you were alone with your silence and your tears and your nonexistent originality.

Dusk falls in violet streaks. You reach your room on the second floor of the building, open the bedside window and stick your legs out into a cool breeze. The Ache joins you. Danny Burton, the local MP, arrives in his van, his smiling bald face plastered on its side like an uncanny double enclosing its original.

“Hey look, it’s Danny Burton, the local MP.” Danny Burton turns his head. He glares at your dangling feet for a few seconds before entering his house. “You know, this is the first time in three years he’s looked at me and it’s at the peak of my degeneracy.” You turn to the Ache. “One of my favourite past times is watching him wander around the house at night, topless and unsure of himself. He always goes to check on his BBQ.” You bounce on the bed in mania.

“See this is what people do, right?” the Ache says, mirroring your excitement. “Like, look at that lady walking her dog.” The Ache motions, with a cruel glint in their eyes, to the passerby on the fast dimming street. “What do you think she gets out of that? Doing that every night?” Without waiting for you to respond, the Ache answers, in a low, sarcastic tone “I guess she gets enjoyment. Doing her thing. Like everyone else.” The lady and the dog disappear beyond the curve of the road. Another pair soon arrives, taking the same path as the one before.

A few months back, you’d met an old friend at an exhibition on intersectional feminism. After the perfunctory art, wine and grapes, she drove you home, back to your run down flat in an otherwise bourgeois neighbourhood. She sat silent as the sun set before the dashboard, then asked how anyone could live like this; how anyone could stand driving out of their perfect suburban home, at the same time every morning, to work the same shift every day, for the rest of their stupid life. The dull ache of routine; the slow, boring death. You said nothing. You said nothing because you agreed with her.

“Life began as self-replicating information molecules,” you reply, obliquely. “Catalysis on superheated clay pockets. Repetition out of an attempt to bind the excess of radiant light.”

It is dark now; a formless hollow, pitted with harsh yellow lamps of varying, distant sizes. The Ache flips onto their stomach and scoffs “What’s that? We’re all in this pointless repetition together?”

You respond, cautiously “I just don’t think that being smart is any better than being stupid; that our disavowed repetitions are any worthier than anyone else’s.”

The Ache returns your gaze with an intensity you’ve never seen before. “Did I say being smart was any better? Did I say that? Being smart is part of the issue. There is no trajectory that doesn’t become a habitual refrain. When you can do anything, everything becomes rote, effortless and pointless.

“But don’t act as if there’s no difference between us and these fucking idiots,” the Ache spits, motioning into the blackness beyond your frame. “I knew this one guy, this complete and utter fuck. We went to a café, and he wouldn’t stop talking about the waitress, about how hot she was, how he wanted to fuck her, while she was in earshot, because, I don’t know, he thought that would get him laid.

“Then we went for a drive and he failed a fucking u-turn. He just drove back and forth, over and again. A dead, automatic weight. A car came from the other lane, towards us, and waited for him to finish, but he stopped in the middle of the street and started yelling, saying shit like, ‘what does this fuckhead want?’ He got out of his car, out of his idiot u-turn, and tried to start a fight with the other driver — you know, the one who’d waited silently for him to finish.”

You don’t attempt a rebuttal; you don’t want to negate the Ache’s experience. Instead, you ask “Why were you hanging out with this guy in the first place?”

The Ache responds “Because I was alone, and I was lonely, and I had no one else.”

It is 2AM. Moths dance chaotic across the invisible precipice of your bedside window, between the inner and outer spaces of linguistic designation. There is a layering of history here — of affects and functions that have blurred beyond recognition — discoloured, muted, absented.

In the hollow of your bed, the Ache laughs. You don’t dare close the distance. Sometimes you find the edges of their impact and trace your own death. All your worries manifest without content. All form and waver and empty expanse where you drink deeply without a head. Because you have lost so much time already. And nothing keeps.

Months later, after the Ache has left, you will go to the beach. You will see the roiling waves beneath crash into the rocky shore of the esplanade, a violence that merges formlessly into a still, motionless horizon, for they are two and the same. You will be unable to put into words how it feels to know that such a line of calm exists out of the pull and push of endless change, that it has existed long before your birth and will exist long after your death.

The last lingering traces of acid flee your skin. Doused in tomorrow’s stupor, you close your eyes. You catch no sleep.