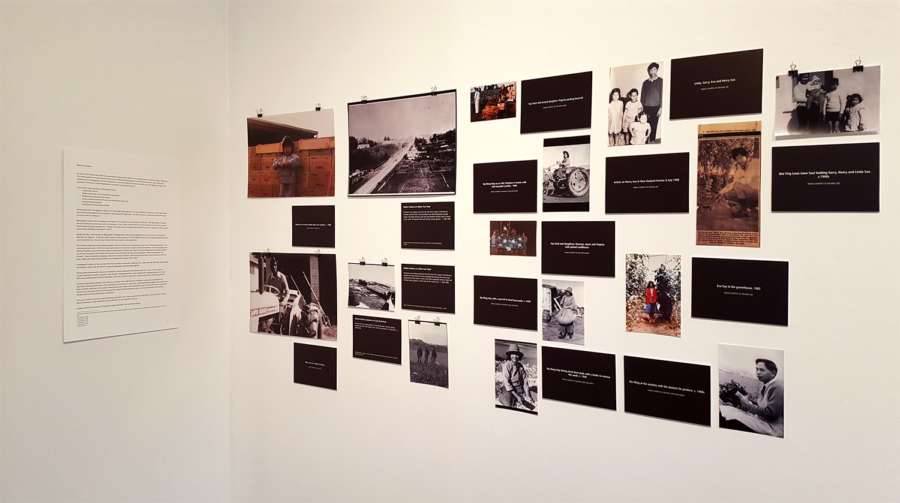 This exhibition, like all things, began with a conversation.

Late last year, after one of my family’s frequent visits to my workplace – they really come to see the dog Mia, not me – a conversation emerged about curating an exhibition on New Zealand Chinese. As our exchange strayed to food, as almost all of my conversations do, we began ruminating on the contributions the Chinese had made to this country and how they have shaped New Zealand’s unique culture.

A lot of what we enjoy in New Zealand, such as Owairaka red kumara, bright colourful lanterns, fresh fruit and vegetables, and all those tasty dumplings, are mostly due to the Chinese. So why is this only being spoken about now? I think there is a tendency for New Zealand Chinese to not really speak about things, but to just roll up their sleeves and get on with it. I get it, I can be like that.

Yet there have been many moments, some watershed, over the past 175 years since the first Chinese came here, which have gone unnoticed and unacknowledged: stories of hardships, camaraderie and resilience. These are the stories that I have been curious about, and with this exhibition titled Gum Sarn: Evolving Notions on the ‘Sweet Earth,’ I hoped to place New Zealand Chinese at centre stage and for contributors and visitors alike to find their voices.

A brief explanation on the title: ‘Gum Sarn’ or 金山 translates to ‘Gold Mountain.’ The Chinese have often referred to New Zealand as ‘Gum Sarn’ when describing where relatives or friends have gone to. In the late 19th Century, it was term grounded in reality as travellers were literally searched for gold in the mines of Otago, California and British Columbia. Nowadays, to say someone has gone to ‘Gum Sarn’ could mean they have gone in pursuit of new opportunities or a different life for themselves.

The focus of this exhibition was on the recent history (1900 onwards) of New Zealand Chinese in Auckland. This was due to two reasons that became apparent in the infancy of Gum Sarn. Firstly, that the Auckland Museum was showing a year long exhibition that tread similar territory, titled Being Chinese in Aotearoa: A Photographic Journey. This covered all of New Zealand and from as far back as the very first settler Wong Ahpoo Hock Ting (Appo Hocton) in 1842. After the gold rushes of the 1860 – 1870s in Otago, many Chinese moved to urban areas such as Auckland. As a born and bred Aucklander, I was curious about my own surroundings and often reflect on the city’s evolution, as it builds out and up. Secondly, Gum Sarn could grow into a behemoth of an exhibition, bigger than the space I had for it. There are many New Zealand Chinese in Auckland and many people who have memories of Chinese who had settled here. I did not want to dilute the impact of the materials by overcrowding the space. 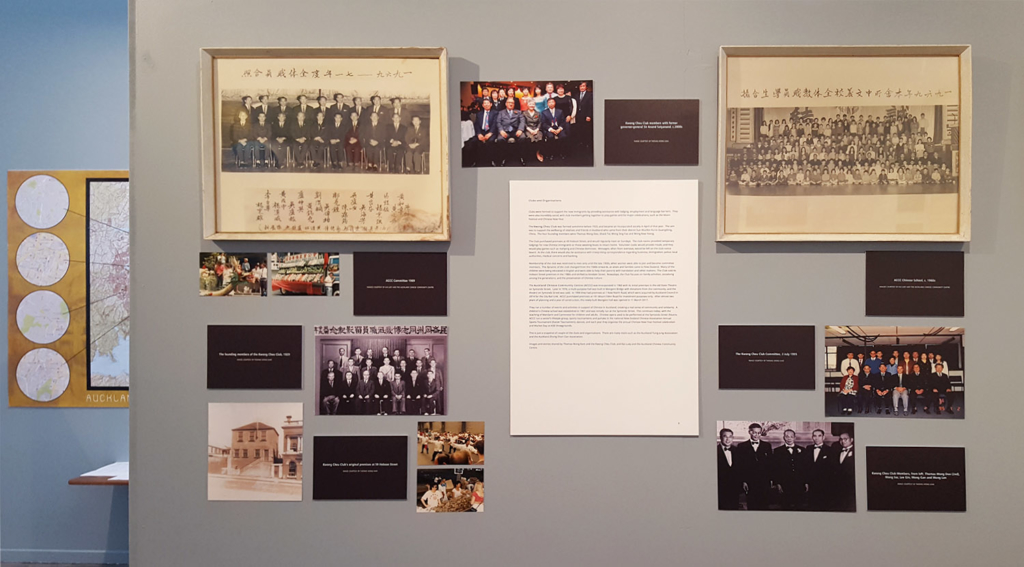 As Gum Sarn was a participatory exhibition, people were invited to contribute photographs and ephemera, as well as stories and memories of significant places for New Zealand Chinese. Interest was slow at first as word steadily got round until momentum began to build, and then I just had to call it, otherwise it wasn’t going to be up on the walls by the 19th August! Every contributor was incredibly generous and gracious with their time and materials, and it was wonderful to engage with different generations of New Zealand Chinese, all of whom were interested in exploring and celebrating their Chinese heritage.

Thus the exhibition was very much dictated by the materials contributed; there was no fixed narrative or an attempt to fit the material into a particular narrative. Rather, it evolved organically; I listened to contributors and gathered what I thought was significant and of interest. In a way, the material guided and generated its own timeline, from the poll tax certificates with the earliest dated 1907, the 1940 entry documents of Wong Chan Shee, the ACCC Chinese School photograph of 1969, to the Oriental Markets of the early 1990s. And of course there were old restaurant menus – can you believe crayfish chow mein was 95 cents?!

As for the memories, once collated into a trusty Excel, they were categorised into: market gardens, fruit shops, restaurants and community centres/hotspots. The memories were then pinned to a large map of Auckland, highlighting how the geographical and cultural landscape of Auckland has changed over the decades. For example, Khyber Pass Road and Carlton Gore Road in Newmarket used to have market gardens on both sides of the street. It’s hard to imagine it now, and in 20 years’ time how much will Auckland have changed again?

The response to Gum Sarn has been overwhelming positive and appreciative. All the contributors were ecstatic with how the exhibition was curated, and excited to see their contributions and stories on display.  It was important that they were happy about it as I felt entrusted with personal treasures and I wanted to present them in a way that was celebratory and edifying. Endless conversations were had, memories of this and that, things that people hadn’t thought about in years. The majority of visitors were from the New Zealand Chinese community, who recognised their families and friends in the images, or the shared experiences, such as helping their families in fruit and veges shops. The exhibition also engaged the wider Auckland community with a number of visitors commenting on how informative it had been, and how the Chinese Poll Tax and the reunification of families during WWII needed to be taught in schools.

Noted favourites for visitors were the ACCC Chinese School class photograph, c.1960s, which was taken inside the State Theatre on Symonds Street. Many stood in front of this image for some time, searching for themselves, family members and friends. Another would have been the entry documents of Wong Chan Shee, who came to NZ in 1940 under the reunification of families. The map of Auckland was added to during Gum Sarn’s run and served as a cultural resource – many visitors added locations that others were unaware of.  It was fascinating to compile memories of Auckland at this particular point in time and at this North Shore locale. If Gum Sarn had been exhibited elsewhere, in say Mangere or Howick, I wonder how different the map would have looked.

Gum Sarn was always going to be personal, an exploration of my own identity and sense of place as a second generation born, fifth generation resident New Zealand Chinese. Without this exhibition, I wouldn’t have uncovered my great great-grandfather’s poll tax certificate dated in 1907, which confirmed my family’s presence here in New Zealand for over a century. I learned a lot about my heritage, and the struggles of my community, some of which continue now. It’s always interesting to observe people grappling with my Kiwi accent and my Asian face. I must admit though, this happens a lot less than it used to.

This process has spurred on further conversations and research. There is still more to be uncovered, and I plan to share the resources to keep the dialogue going and lead to a greater understanding and appreciation of New Zealand Chinese. History is being written and rewritten as we speak. And like all things, it begins with a conversation. 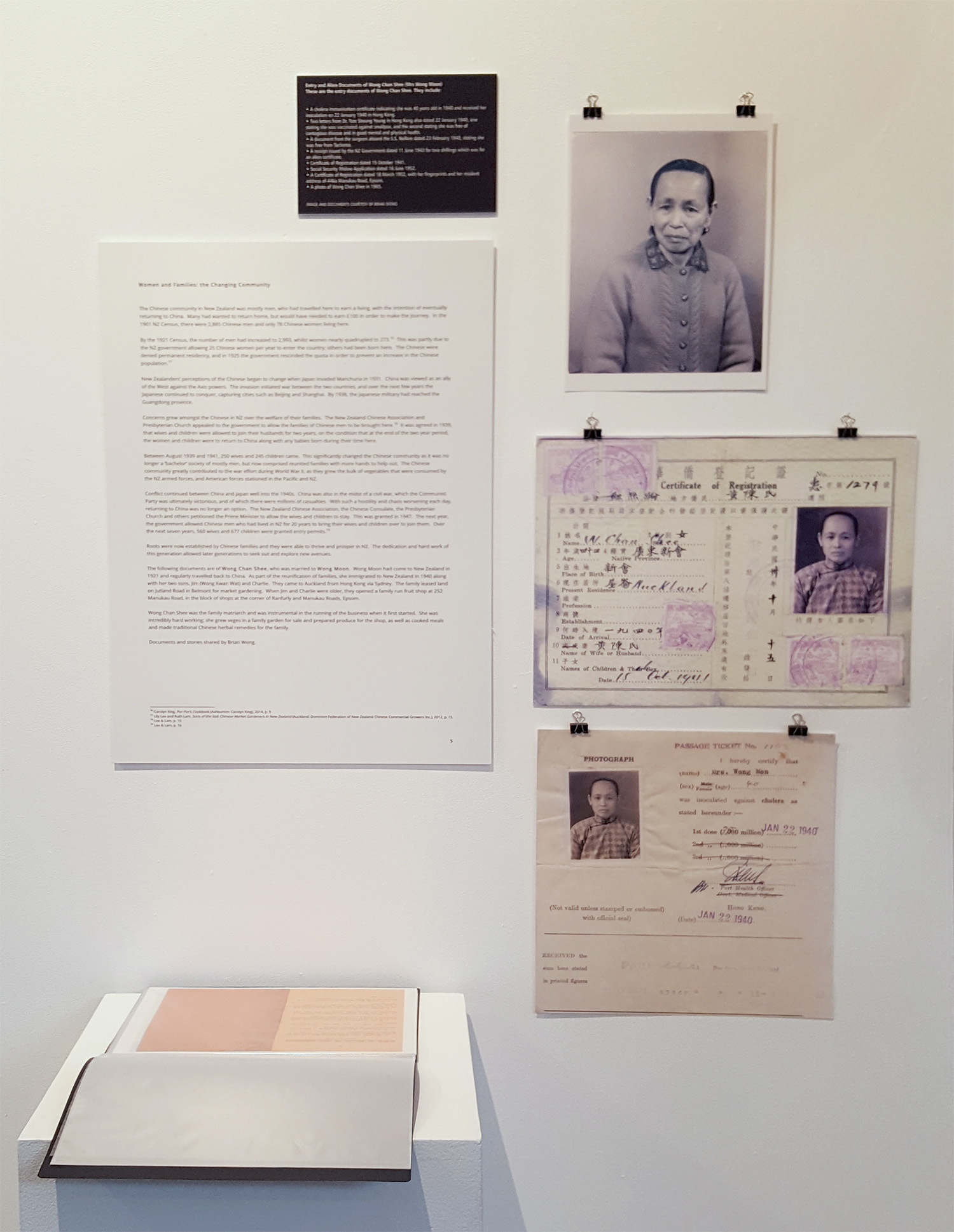