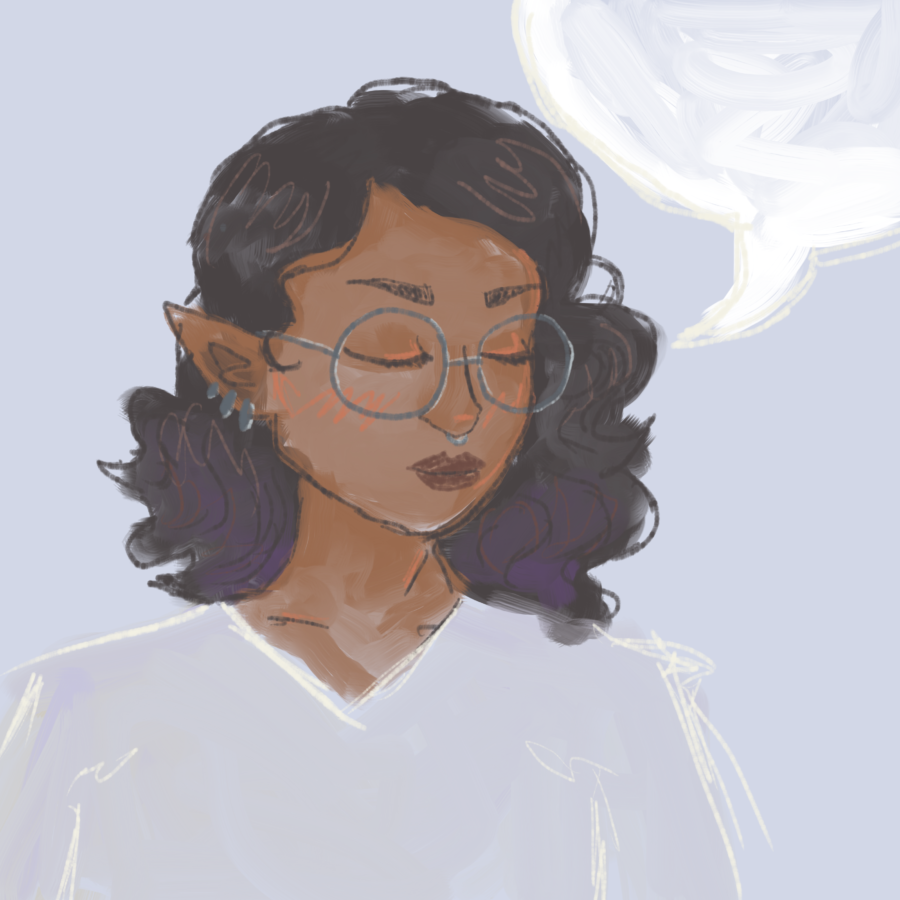 kī anthony is an autistic lesbian of Indian and Chinese descent. Growing up beneath mahjong tables, jasmine garlands, and the ostensibly watchful eye of the Christian god, they collected notebooks instead of friends, and eventually collected words to put in them. These days, they mostly throw poetry and personal essays at prompts and see what sticks.

Amy Weng: There are so many powerful and interconnected issues that your writing touches on. I think what struck me most was the tension between the censorship of sex work and the exposure that our online environment entails – a push and pull between the need for visibility and invisibility and the inherent risk involved. Do you think there needs to be more space for the voice of sex workers? If so, what do you think might be some of the issues or stories they have to tell?

kī anthony: Sex workers have always been capable of digging up spaces for ourselves. We communicate endlessly: if you ever look at a sex worker’s contact list, it’s likely full of “Timewaster” or “Don’t book” or “Takes condom off” notes passed on from other sex workers who’ve experienced harm. That’s one crucial thing we pass on to each other, if nothing else.

The problem, I think, is that spaces for sex worker voices outside of sex worker spaces are always going to be fraught. Even in shared spaces like Twitter, or client-and-worker forums, or more recently Discord servers where clients and workers interact, it’s not just the need for impenetrable personal security that plagues us. With the move toward demanding authenticity, we’re expected to be flawed, vulnerable nymphs who post images of back rolls or faint acne and wax lyrical about how insecure we are about our bodies just enough that men can swoop in and assure us that we’re beautiful. Not enough to be “depressing” or “crazy”, mind.

The people who are interested in elevating sex worker voices are also often looking for voices which fit a specific narrative. Conventionally beautiful, young, cis, white and university-educated, working to pay off student loans, someone who needs the money but doesn’t need-need the money for kids, or disability, or bad teeth. I’m going to sound way older than I am when I say this (and the industry does age you!), but many of these women have only ever worked as “high-class independents”. We rarely get street worker voices, drug-using voices, voices from people slowly forced out of the industry as disabilities escalate. This media narrative then becomes reinforced internally—on platforms like Twitter where johns are shopping for a sex worker like they might shop for free-range eggs, what sells is “who am I sure isn’t exploited”? So Asian workers in particular have to make it extremely clear that they are extraordinarily fluent in English to earn money on platforms where making bank and sex worker discourse overlap, since that proves you’re not “illegal” or “pimped out”. If you need the money too much, there’s two ways things can go: they don’t see you because they’ll feel bad, or worse, they try to get away with anything they want because they know you’re desperate.

It’s very telling that I’m as polarizing a figure in these shared spaces as I am. I keep my head down. I talk about race only when white women are already talking about race, and then they get to retweet me and feel good about themselves. The more marginalized someone is, the less likely they are to have a space where they can publicly say: hey, I am a sex worker with these experiences, and y’all are talking shit. The last time a conversation about race in sex work came up, a bunch of white sex workers joined up with Family First to get “illegals” deported—of course, only the Asian ones, and not the dozens of European backpackers I’ve shared cigarettes on brothel balconies with.

In that sense, having the horrific experiences in tech that I’ve had since a very young age give me an advantage. I’ve been doxxed before, and I’m reasonable at risk assessment without spending 90% of my capacity worrying about not getting to live a normal early-20s social life. As a Marxist and a radical organiser, I understand clearly that my work is work, and I think I find it easier to toe the line between “not nice enough to book again” and spending tons of unpaid time coddling entitled men. I do, of course, have to keep my mouth shut at work!

That’s the thing. However much a man who pays me to fuck me says “I’m listening, what do you need”, what I need is for him to feel what he needs to feel. Whether that’s an orgasm or a sense that he’s a good ally, I’m not going to tell him what I really think. The same goes for white sex workers who think we’re friends but have the ability to convince half my clients not to see me again if I “bully” them for being racist.

AW: The misogyny of the tech industry is a recurring idea in sync, line and hooker, which mirrors the discrimination rampant in sex work, albeit in a more insidious way. I’m interested in what drew you to the tech industry. And what are the positives that you still see in the internet?

Funnily enough, it was sexual repression! In sync, line and hooker, I mention that I ended up volunteering on Wikipedia more or less because my parents were conservative, tech-literate Christians. They put such strict filters on my Internet access as a teenager that I had no exposure to LiveJournal or Bebo or whatever my peers were using, and instead found myself on uncensorable open-source forums and IRC channels. A lot of people there are autistic, and the ideology drew me in because it made sense to my lonely teenage brain: social skills don’t matter if you’re honest; the truth is objective and never relies on social justice or empathy; God isn’t real and sex is good, actually. Of course, I ended up in a lot of sexual situations in which my relative inexperience with online interaction or sex education were bonuses for predators.

Simply being a bright young girl-child on the periphery of FOSS scenes did kind of set my future in motion, I think. Exposure to things like Python libraries, even if I barely knew how they worked when not being mentored by someone who ultimately wanted to fuck me, opened doors for volunteering as “tech support” at local charities who really had no idea what that entailed. My long-suffering tolerance of men being sexually inappropriate led to me, kicked out of home after being outed, finally applying to a brothel. Then, tired of being told I was “too dark” for brothel clientele looking for pale Asian submissives, I built my first sex work website. The rest, in both industries, came after that.

That’s part of the frantic undertone of the piece: how stuck I feel. How impossible it is to advance in my tech career, because I’ve almost typecast myself into performing emotional labour in both my jobs and am too burnt out to upskill; how impossible it is to leave the sex industry when late capitalism and the disposability of tech workers doing feminized labour both demand that I never stop hustling.

But y’know, we’ve just come out of lockdown, and that’s where people like me shine: we’re used to communicating on the internet, our main clusters of friends include people we’ve never seen in real life, and I finally had an excuse to ignore my sex work inbox. If you are fluent in navigating the endless torrent of information and demands that is the internet, and you have communities which help you do that, you’ll never be bored or alone. I’m in, y’know, Facebook groups for autistic Black and brown people, or Discord channels with other survivors who also have a background in the same FOSS communities I came from. That would be an impossible group to gather in person.

The failings of the modern internet are also its strengths, unfortunately. Facebook or Twitter can suspend you for being slightly impolite about the police, but at the same time they’re where you’ll find footage that the mainstream media will never play of police brutality. We’re shackled to tools which turn our personal information into money making machines, and we generate content within those systems that is revolutionary.

Really, that’s no different from capitalism as a whole. We exist within it, and we circumvent, and we fight to survive. Keeping everyone connected is crucial to that struggle, and that’s where I find my place.

Who are the writers that inspire you?

Okay, this is going to be very silly. I don’t read as much as I want to, especially since a head injury a few years back which has meant the screen time work requires from me is about as much reading time as I can handle!

Fiona Apple is a huge influence on the way I write about sex. She writes lyrics and music which strike at the heart of what it is to be wilful, precocious, traumatized, overly self-aware in all the ways that I think sex work and survivorship compel me to be.

Beyond that, my comrade Emilie Rākete is an incredible wordsmith. It’s been a joy to watch her hone her skill on article after op-ed after TV interview, and I can only hope to have that level of consistent rhetorical power when talking about injustice.

A few recommendations for actual things to read: Nicole’s mentioned Freshwater by Akwaeke Emezi, which is phenomenal. The Hustling Verse contributors have an immense range of strong voices as sex workers and poets (I should have worked this into the answer to the first question, maybe!). If you’re into tropey, comforting romantic fanfiction, lady_ragnell on AO3 is one of my go-tos. Revolting Prostitutes is enlightening and very readable even if you don’t have industry experience.

Some of the most compelling things I’ve read come from letters from incarcerated people. If you’d like a penpal on the inside, do sign up to the Prisoner Correspondence Network; you can also grab a print or downloadable copy of Letters from Lockdown from the People Against Prisons Aotearoa store.