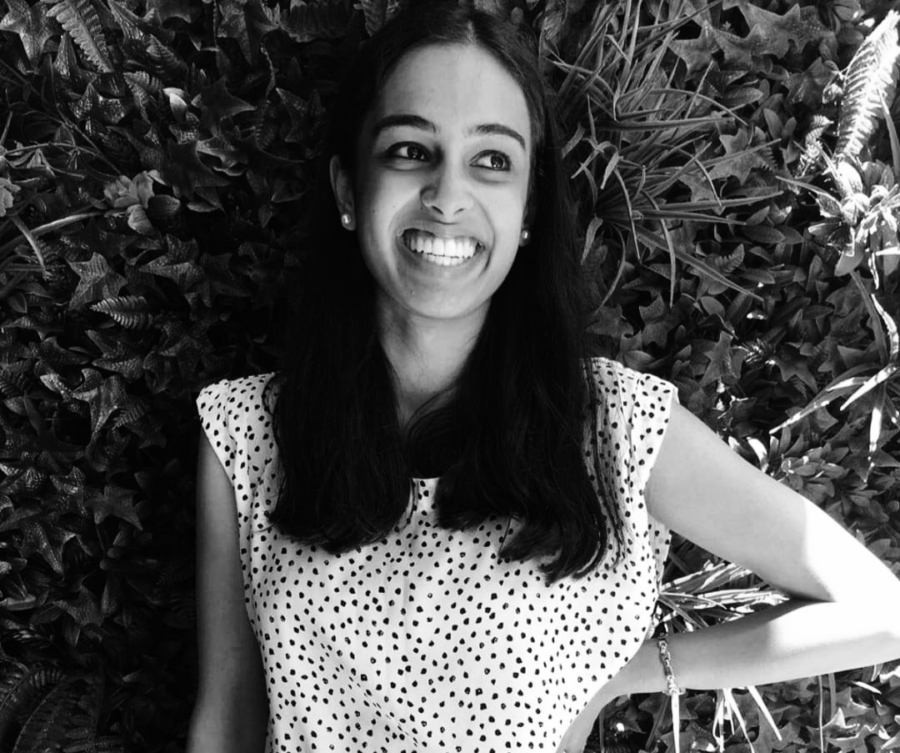 Nithya Narayanan is currently pursuing a BA/LLB (Hons) at the University of Auckland, where she also works on the editorial team for Interesting journal. She has completed two creative writing courses with distinction at the New Zealand Writers’ College. Her poetry and essays have previously appeared in Starling, Mayhem, Minarets, NZ Poetry Shelf and ‘Studio Vignettes’.

Her collection of poems, Inheritance, has been published as part of Epigraph Project, introducing readers to new and emerging Asian New Zealand writers. Hainamana editor, Amy Weng, speaks to Narayanan about the grotesque body, and the role that fiction can have in conceptualising precarity and trauma.

Amy Weng: I’m interested in corporeal intimacy of your poems – in your poems, the medical and the visceral collide in fascinating ways. What is your interest in the body?

Nithya Narayanan: I’m interested in the body as a place of truth. The body can’t lie; you can conceal the psychological but not the physical. We sometimes speak of the body ‘betraying’ true emotions. Equally, the body can disrupt or contradict performances of identity. An example that comes to mind is Don DeLillo’s White Noise. The protagonist is this famous Hitler studies professor but, ironically, can’t actually speak German – he can’t physically produce the words.

Disease and injury feature significantly in these poems. I wanted to represent the body at its most damaged, its most vulnerable—but I didn’t want the violence to feel gratuitous. I think Sheryl St Germain is one poet who strikes that balance particularly well. She writes about drug abuse quite a bit and her poems fuse the beautiful and the horrific in really interesting ways. I was thinking about some of her work when I wrote ‘Stairway to Heaven’. I was also doing some reading around Mikhail Bakhtin’s ‘grotesque body’ idea at the time, for a class. The grotesque body is a trope that was quite popular among literary and visual artists around the 1950s. Bakhtin was interested in the idea of the human body as permanently unfinished. A lot of carnivalesque art tends to emphasize openings or orifices; it’s preoccupied with the regenerative and procreative functions of the body. While I wasn’t consciously thinking about Bakhtin when I wrote these poems, the image of the womb does feature repeatedly—first as a site of trauma (in ‘Hiroshima’) and then as a sanctuary from trauma (in ‘Seven Things’).

AW: It’s interesting that you bring up Bakhtin though. In his text, Rabelais and His World, the idea of the carnivalesque, which is inextricably linked to the grotesque, describes the phenomena of folk festivities – that is, the communal and collective institutions that serve a critical function within society. I wouldn’t say that your poems are ‘haha’ funny, but there’s an absurd humour in them – usually in spite of the body. For example, the way the mother in ‘Hiroshima’ dyes her hair while insisting she’ll stop, or even in ‘Stairway to Heaven’: “he loved her with his teeth…” Does poetry provide a way for you to deal with societal issues as well? Is there a critical function for poetry?

NN: Carnival is all about the inversion of social structures—particularly social hierarchies. I think even the act of creating art can be weirdly carnivalesque! I like the ‘slipping out’ of identity that often happens when I write. I enjoy the fact that I can write something as a person of colour—or as a woman—that isn’t necessarily about being either of those things. I think there’s something really universalizing about poetry. That’s a huge part of why it’s such an effective medium for dealing with the difficult things. In my second year of law school I read a high-profile manslaughter case about a toddler who was subjected to horrific levels of abuse: ‘Stairway to Heaven’ was my way of emotionally processing what I had read. How we use fiction to see, understand and conceptualise precarity is so important. Poetry used to be written by a very homogenous population, by people who all looked and thought the same, so it’s interesting to think of contemporary poetry as a kind of decolonising tool. I’m glad you picked up on the humour! There’s something almost sardonic about ‘Stairway to Heaven’, in places—“surfeit of love”; “maybe it was all/just a gross misunderstanding…”. I think a lot of that came from the anger I felt during the writing process. I once watched JK Rowling do an interview about The Casual Vacancy where she was asked if she thought of herself as a satirical writer. She responded by saying that real life is often a lot sadder, funnier and stranger than most fiction accounts for—yet the writers who do choose to depict that get labelled satirists! I don’t consciously sanitise my poetry, but I don’t consciously politicise it either. It is what it is, and often what it is a comment—however oblique—on something I don’t like about the world.

AW: In a recent piece for NZ Poetry Shelf, you wrote about your love for Sylvia Plath and your admiration for her will to endure. That endurance also seems to permeate your works. You also mentioned that there might be a societal fear of poetry – and perhaps all literary works – that deal with mental health explicitly. Can you elaborate on this a bit more?

NN: There’s a lot of conversation at the moment around what constitutes ‘triggering’ material and what doesn’t. Artists, publishers and producers absolutely do have a responsibility to ensure that what is being put out into the public domain is appropriately and accurately packaged. This is especially important because, very often, the readership will contain people who are in the midst of trauma or recovery. I sometimes think, though, that some of the dialogue around this issue has gone to a slightly problematic place. There’s this strange notion that texts dealing with trauma or violence are kind of exploding onto—and somehow corrupting—the pure, blank canvas of the adolescent psyche. I think that sort of narrative is reductive and probably inaccurate. Literature and media didn’t create mental health issues, and the issues aren’t going to disappear just because we decide not to talk about them. I think the word ‘explicitly’ is important here because, of course, most fiction is grappling with someone’s psychological reality in some way. I remember studying ‘The Yellow Wallpaper’ in high school – it deals allegorically with what many have interpreted to be postnatal depression.  But that’s materially different from teaching Plath, whose poems discuss themes like suicidal ideation quite overtly. Young people often feel quite alienated from poetry, which is understandable given that a lot of the work they’re exposed to doesn’t actually address issues impacting them! There’s this idea that poems about war or nature have more literary value than poems about, say, adolescent strife. There’s also a general societal unwillingness to engage with difficult material. But if poetry doesn’t explore the seamy underbelly, it’s not doing its job. Poetry should go to the dark places. That’s the kind of poetry I’m interested in.

AW: You mentioned you don’t read much poetry yourself. Who, or what do you read then?

NN: I do read a bit of poetry, though I rarely read entire chapbooks or collections. I end up reading quite a lot of the stuff that comes out in online journals like Starling and Turbine. There’s so much talent in there. I’m not a particularly faithful reader in that I don’t really have allegiances to specific writers or genres. I did go through a Jhumpa Lahiri phase in my mid-teens which was quite formative. I’ve recently discovered Tony Tulathimutte, who I think is absolutely fantastic. He has an excellent short story in the Cimarron Review called ‘Composite Body’ – it really blew me away. Occasionally I’ll latch onto a single writer like that and go and stalk all their work, but most of the time I’m just reading random stuff I come across. At the moment I’ve got a couple of things on the go including Rose Lu’s All Who Live on Islands and Donna Tartt’s The Secret History.