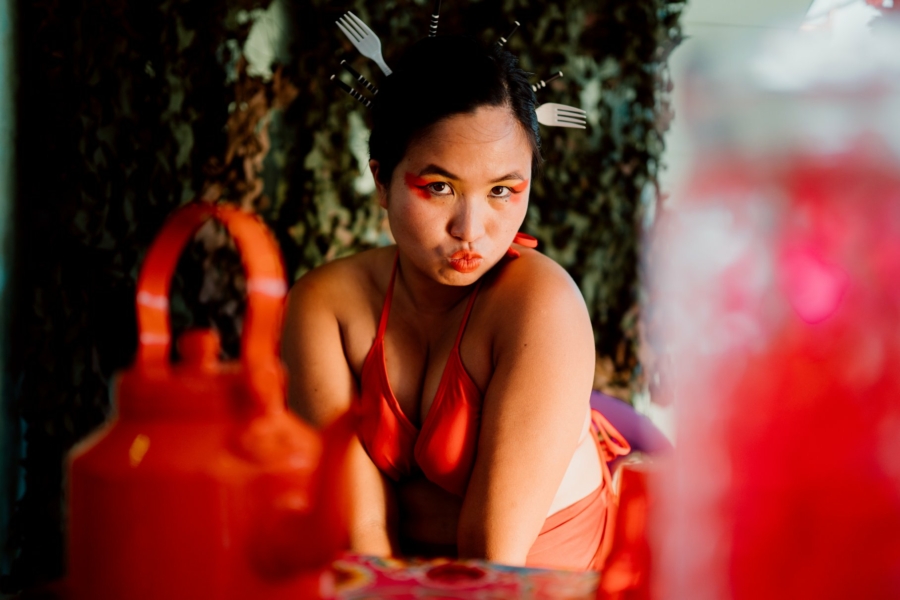 Aiwa Pooamorn, co-creator of Have You Ever Been With An Asian Womxn? Photo by Anamika Balachander

Use code ‘AsianWomxn’ to book your ticket for only $25. Offer valid until Sunday 16 February 2020.

Can we start with the title of the show? Where did that come from?

Gemishka Chetty: It was a line from our previous show, Go Home Curry Muncha, which we used to confront audiences about their racial preferences. Following Go Home Curry Muncha, we wanted to talk specifically about sex, and expressions of sex, from the perspective of Asian women, that actively promoted our desires and needs. Something we don’t see in theatre and in the media. When we were growing up, we always saw portrayals of romantic relationships, sex, and desires in the media being expressed for men, and from his point of view. This is our way of challenging and attempting to subvert that white male gaze.

The title was also inspired by personal experiences of unsolicited comments that come from predominantly white men.

Aiwa Pooamorn: I used to ask that question ‘Have you ever been with an Asian woman?’ to white men that I went on Tinder dates with. I feel angry at being fetishised now, but when I was younger, I aspired to be seen as exotic by white men. I needed to feel special. I wanted to be the first Asian woman that they’ve been with. All my life I’ve been told by my family and by Thai society that I’m ugly because of my dark skin. The realization that my dark skin was attractive to white men blew my mind, it got me hopeful and excited! It made me feel powerful, to think that I could be seen as this super sexy and exotic Asian bombshell by white men. It was strong internalised racism – seeing myself as only being worthy if a white man desired me.

GC: [For me]… when guys would try and flirt, they have said to me, “You know, I’ve never been with an Indian girl before.” At the time it left me feeling really confused, but after talking about these experiences with other women, I realised that I was being fetishised, and that it was a display of white male dominance over me. They reduced me to my ethnicity while trying to flirt with me, without bothering to find out about who I am. These assumptions are based on stereotypes and fantasies and are placed on me. That frustrates me. And so this show is a way for me to address those misogynistic traits so that other women don’t feel like they are alone, and can identify when they are being fetishised, and know that they don’t need to put up with it.

Your previous show, Go Home Curry Muncha was an attempt to decolonise MasterChef and that whole genre of food reality tv that has become a fixture in our living rooms. Have You Ever Been With An Asian Womxn? enters into the private space of our bedrooms and our bodies via pornography. Why did you want to tackle this subject? How do you think pornography has affected your lives or perspectives?

We think it is important to talk about these issues, and open up the dialogue in the public space of the stage so that we destigmatise the shame around sex in our culture. The more Asian women talk about sex, and consent and what we like first, the more we can speak out about our good and bad experiences without having guilt or judgment attached to the discussion.

Are you influenced by the work of other theatre-makers or artists? Who inspires your work?

AP: I was in OTHER [Chinese] directed by Alice Canton. She inspired me to become a theater maker. I want to continue with that idea of creating space for people to come together as a community to share their stories on stage, regardless if they’re actors or not.

GC: Definitely Alice Canton as well. OTHER [Chinese] was the first piece of theatre I saw in New Zealand, that I fiercely related to for the first time. It validated my experiences as a young third culture kid growing up in New Zealand, which made me feel like I could tell my own story, and share my own experiences.

I am also influenced by Renee Liang, who has helped both Aiwa and myself develop our poetry stories, and has been extremely supportive.

You are both poets. How does that play into your scriptwriting?

AP: We use our poems as starting points for devising our shows. We experiment with how to bring our poems to life on stage, through our physicality, coming up with new takes on traditional dance and rituals, creating personas from stereotypes and subverting them.

GC: Poetry is the best way we communicate our personal experiences, and we use that to develop our shows from those experiences, themes, and different tones. We also use poetry as a way to disrupt traditional narrative and theatre form.

What about the roles of Ash Raju, Ellie Lim and Yuen Ling Elaine? Is this their first time working on a show like this? How has each of them contributed to the production?

AP: Ash performed in An Organ of Soft Tissue [by Erin O’Flaherty and Rachael Longshaw-Park] and Ellie was in OTHER [Chinese]. Elaine is a newcomer and this will be her first time in a theatre show! Each of them brings their own personal stories and perspectives to this devised show.

GC: We are really excited to work with these bold women, who each bring, not only personal experiences that are deeply relevant to the topic, but are also here to bring a sense of solidarity on stage for other Asian women in the audience. Because they too are wanting things to change, and want open discussions to be had.

Why do you think it is necessary to keep confronting audiences with these issues, even ideas that might make people uncomfortable?

AP: In my daily life, I find it difficult and unsafe to confront people when they’re being racist and/or sexist. The stage makes me feel free to take up space, to challenge, to speak out. It is necessary for me to keep confronting audiences just for my own sanity.

GC: Art has the ability to move people, to awaken things in people, and to make people feel like they are not alone in their experiences. We make a decision to confront in such a bold way because it can help other women confront things in their personal, everyday lives. We don’t always have to be subtle or polite, and say yes, we can challenge that characteristic of how we have been raised, and indoctrinated to think.

When it comes to representation of women, that is something that has been indoctrinated into us by the patriarchy – from how we raise women to be subservient to men, to always saying yes, and never speaking out of turn, or never thinking about our desires. By confronting these issues, our intention is to make audiences react in a more engaged way, creating a sense of urgency within them. So that we as a society can unlearn those traits and challenge those societal norms.

I’ve never grown up with a representation of an Indian woman that challenged society. So, I would like to offer that representation to other young girls, and women out there. It’s important that we offer a variety of female experiences and representations on stage without feeling like we need to conform to any mold, or that we need to justify our rage. Because our experiences are valid, no matter how confronting they may be for some people.

Do you have any other projects that you are working on – and that you can tell us about?

AP: I’m about to have my second baby so no other projects for me at the moment!

GC: Creative Creatures is always brewing up some type of art. We would like to continue making art that creates impact. And grow our community. So stay tuned, and follow our audacious digital escapades. It would be great to develop this show further, and put it on again for a full season after it premieres at Fringe Festival.

Have You Ever Been With An Asian Womxn? is on at Basement Theatre from 28-29 February 2020.