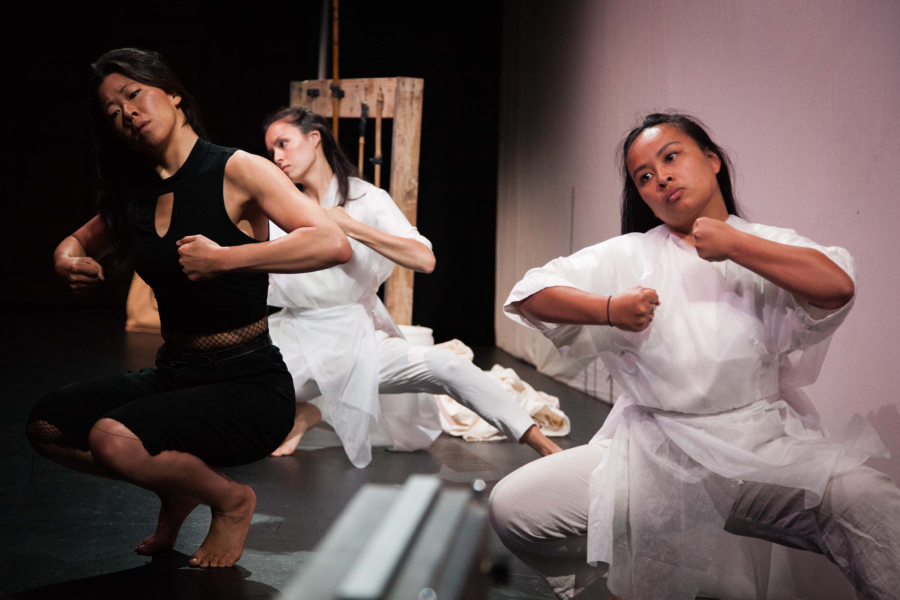 Nikita Tu-Bryant sat down for a chat with Jess Hong one humid afternoon. Tu-Bryant is a musician, actor, writer, visual artist, puppeteer and director who identifies as a storyteller of Taiwanese and New Zealand European descent. She had just driven back to Wellington with a car full of set pieces, having rehearsed for several weeks in Auckland for her upcoming devised show Tide Waits for No Man: Episode Grace (4-8 December 2018).

Produced by Proudly Asian Theatre and SPOOKY ANTIX, this new work marks Tu-Bryant’s directorial debut – although she also performs in it alongside Chye-Ling Huang (co-founder of Proudly Asian Theatre) and choreographer Marianne Infante. The show weaves together shadow puppetry, object puppetry and movement to tell Grace’s story of cultural conflict.

Tu-Bryant spoke casually through bites of her food about her upbringing in Aotearoa.

Nikita Tu-Bryant: I was born in Taiwan. My mum is Taiwanese, my dad’s from New Zealand. He spent 14 or 21 years in Asia – it’s a multiple of 7 but I keep forgetting. He’s trilingual. He speaks and writes Japanese and Mandarin. And English, obviously. So I was there and then our family moved to America for a year, then we moved here when I was three or four. I grew up in Howick, Auckland, and then I moved down here [to Wellington] when I was 18 to study at the School of Music.

Jess Hong: What was your experience at NZ School of Music?

NTB: I was 18 when I went, I didn’t really know what I wanted to do, [but] I’ve always done music and theatre. I auditioned for School of Music because Wellington sounded like a cool city, and apparently – I was told – it was very creative and if I did music, I could still do theatre on the side. And ever since I’ve moved here it’s just like I’m a Wellingtonian at heart, not an Aucklander.

In my third year, I got into my first professional theatre show while I was full time at the School of Music so I was really, really unwell.

JH: Was this during your Cats, Miss Saigon phase?

NTB: Yes! In my first year I did Young and Hungry, and that was really fun. And then my second year I did Cats, so, you know, the rehearsals for Wellington Theatre Society is really intensive. It’s most nights, 7 ’til 10, weekends and then I’m at school 9 ’til 6. After Cats, I was offered my first professional audition for a show called Kia ora Khalid. That was by a playwright and columnist for Dom[inion] Post, Dave Armstrong, and a really amazing composer and friend, Gareth Farr. That was my first experience. I was 19, and everyone else were professionally trained actors. I was really intimidated, really naïve, but learned a lot of cool stuff. 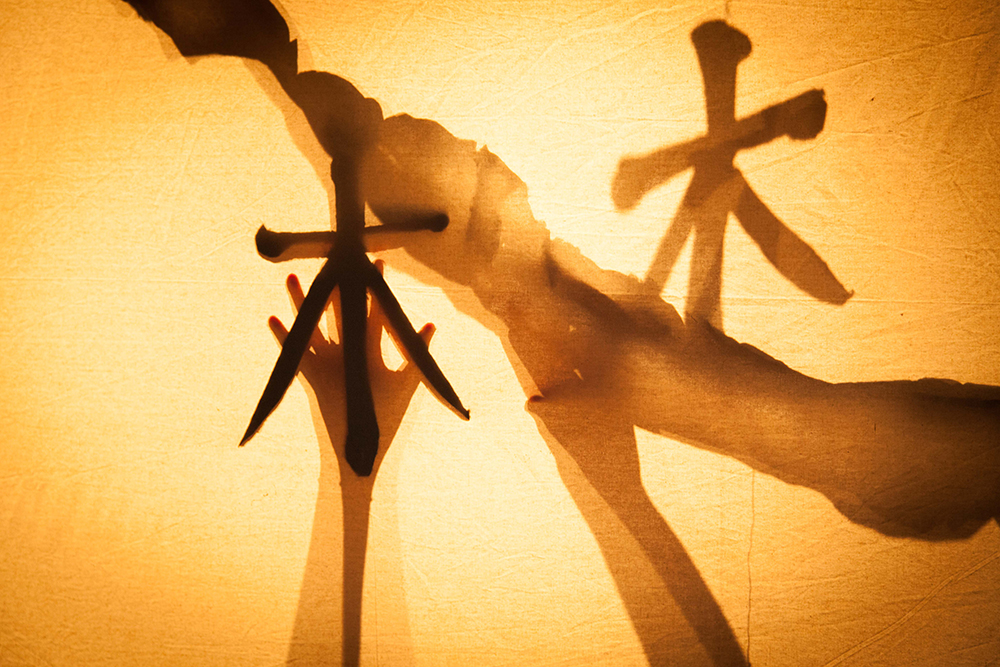 JH: It takes a lot of skill to handle those big musicals. Did you always know growing up that you would be a performer and singer and mover?

NTB: I’ve never had dance lessons, but I love moving. I’ve always wanted to be a dancer, I’ve always envied dancers. I performed all through high school, did Talent Quest and Rockquest, internationals, all that kind of stuff. [I] did big musicals in high school, I was Anita in Westside Story.

JH: Your Dad sounds like he’s quite open minded though, to have travelled all over Asia and learned two other languages.

NTB: My dad was more keen on us to have a social life and stuff cause my mum was really, really strict. Even though he was more, you know, like, ‘honey, our kids need to have friends, they need to not just be studying’, in many ways he’s actually quite Asian because he spent so much time over there. And so there are still some things and I’m like ‘whoa, that’s just not how I think’, you know? But in saying that, it was my dad really that got me in to contemporary music. So he brought me up on rock ‘n’ roll music, Jimi Hendrix, Rolling Stones and that kind of stuff.

After moving down here, I’m constantly having my sister be like ‘we’re really worried about you, when are you gonna have a proper lifestyle?’ But this is my lifestyle, you know? I know it comes from a place of love but it just gets really annoying and unsupportive, right?

This year we’ve reached an interesting equilibrium where they’re less about telling me how to do things and have kind of accepted who I’ve become. This year has been a real big realisation of respect for my family and what they do, and how they support me.

JH: Do your parents come to your shows and gigs?

NTB: My dad was the over-supportive parent. Like embarrassing – so embarrassing. It’s endearing now but when you’re 16 it’s like ‘can you go away, I’m trying to be cool here.’ Also, ‘cause I started gigging quite young, we played in bars underage, so my parents had to be there. They’re really supportive of [my] music – not so much into theatre but still really supportive. I think Dad usually falls asleep in my theatre shows – but that’s ok.

JH: What kind of audiences are you hoping to attract [with your work]?

NTB: I say my audience isn’t a [traditional theatre audience] because I haven’t studied theatre. I’m not a theatre intellect, I’ll be the first to admit that. I’m not trying to do something ground-breaking, I just want to tell Grace’s story.

Even though my dad can speak Mandarin, obviously you still have cultural barriers. So you have a Western guy [like my dad] who grew up pretty free and then you have this really sheltered Taiwanese girl [like my mum]. And even when you can speak the same language, we still have trouble communicating, right? And so they have two languages to choose from [but] I saw a lot of frustrations and miscommunications.

Far out, it must have been so hard for both of them. And so this show is non-verbal because I want to tell the story without the barrier of spoken language. And it is a narrative, there are literal things that happen, it’s not mime, it’s not pantomime or anything. It’s for people that are just beginning their journey of learning English. [My mum] is my compass. So yeah, she is my audience, and other people in that scenario.

JH: Can you talk a little more about the show’s narrative?

NTB: Grace is trying to be respectful of her family and her culture, but still [wants to] feel free to be who she is. This story doesn’t give any solutions – it just kind of raises the question and demonstrates the frustration, and there’s so much want for the two [cultures] to exist harmoniously but there’s also just so much that is very dissonant. 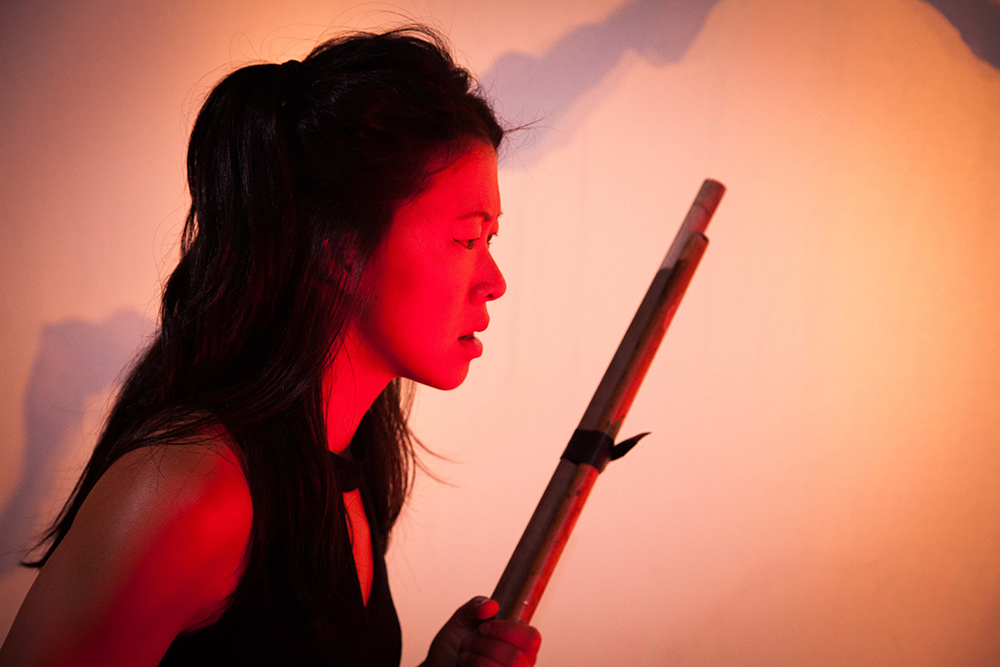 JH: Who is Grace?

NTB: Grace is me. Obviously there are elements in the story that have been changed for dramatic purposes, but my Chinese name is ‘Ya-Han’ (雅涵). ‘Tu’ is my mother’s name, ‘Bryant’ is my dad’s name, and then ‘Ya-Han’ is my middle name, it’s my Chinese name. And ‘Ya’ itself means Grace in Chinese.

JH: Earlier you mentioned that you never had Asian friends in school, because [it] was seen as uncool. I relate to that stereotypical image of the group of awkward Asian students who are all super smart, super shy, and super uncool.

NTB: They’re uncool because of what the majority of people that aren’t Asian have said about this group of people, and we adopt that. But if we can create a new standard which is, like, people are people, and with access to more countries and more cultures, more and more cultures are gonna become homogenised, and people are people at the end of the day.

When I was growing up I remember being the only Asian person in my group, I’d always make jokes about being Asian and stuff and put myself down. I’d feel, ‘they’re not doing it to me, I’m doing it to myself so it’s okay.’

JH: It’s like, if I go for self-deprecation, if I put myself down then I’m cool because I got to the joke before anyone else.

NTB: It wasn’t until I met Chye-Ling [Huang] that she was like ‘bro, that’s really fucking not cool’. She will put you in your place.

JH: I think it’s exciting, though, to have voices come up like your’s and Chye-Ling’s. Two Asian female filmmakers I know in Wellington made short films this year exploring their individual experiences of diaspora. These issues are coming up, and it’s almost like they’re pushing against the surface. More feelings than can be put into words are bubbling up, and it’s exciting, it feels like there’s limitless possibilities to what we can make.

NTB: It is exciting. A long time ago there were these rules about how women should be, and it was, you know, silent, tidy, calm. Any level of erratic, irrational emotion should be contained. So, calm and grace, and not to knowing too much, just all you need [to maintain] the house.

The biggest problem for me was that I asked ‘why’ a lot as a kid. Not to push against authority, but to understand, ‘cause I was curious and I wanted to learn. But of course, one, if you’re dealing with my grandad for example, it would be like ‘you’re pushing against my authority’ and two, ‘you don’t need to know cause you’re a woman’.

Generationally, it’s really hard for people to undo their expectations when they are older as well. You know, you have that in any country, even in New Zealand. My grandparents on my dad’s side are from a different generation and it’s just different, and it’s hard [to understand each other]. 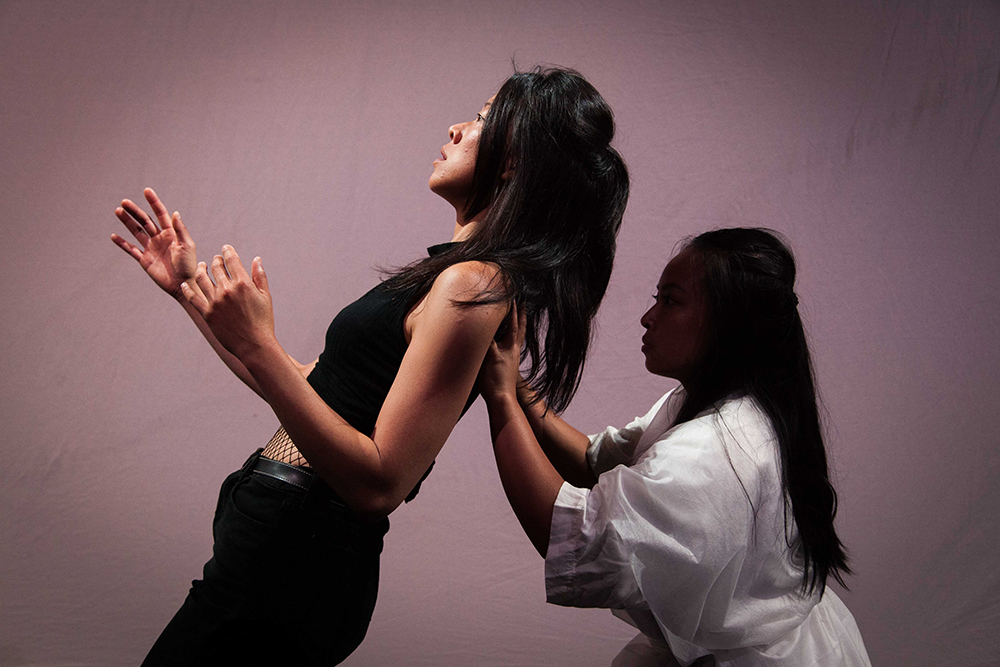 JH: And on your mother’s side? The show’s blurb mentions the patriarchal pressure Grace has to deal with. Have you noticed that with your Taiwanese grandad?

NTB: My sister was the first grandchild, the favourite grandchild, but she’s a girl. All the boys are really much [more] favoured because they’re boys. But I would always get in trouble with my grandad, like, always, always, always … Any level of loud laughing, I’d always get told off, ‘cause I laugh really loud, I laugh with my mouth open. I am very emotional, so all those things are not good. The other one is the lifestyle I lead. I don’t lie, so if my grandad asks me something, I just believe truth is the best option. Oh, I don’t want to get married, I don’t care about a piece of paper.

JH: Looking back at your 15 year old self, the girl who won a grant from NZ On Air and then turned your back on it because they tried to remake your sound, are there any words of advice you would give her?

NTB: You did the right thing, and you’re 15. Yeah, I’m happy about that. I mean, I don’t know where I would have gone. I might have been a famous 15 year old. But I’m glad that back then I knew that success to me was not being someone I wasn’t, and even now at 30 I wouldn’t do it. I would say, your flaws will shape your strength.