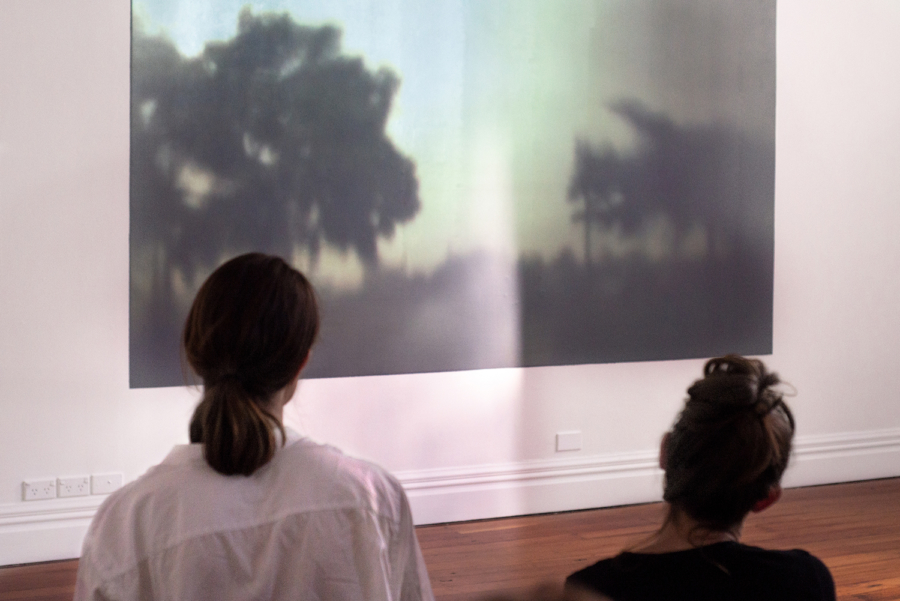 is it?
should it?
could it?
would it?

The exchange show between Taipei Contemporary Art Center (TCAC) and Enjoy Public Art Gallery comes in two parts. A survey opening up the space to the voice of the New Zealand viewer, reworking the questions that stimulated the founding of TCAC here to gauge the voices that are, should, could, would in an unfamiliar space:

Then, a series of video works and two paintings on the wall, exploring personal and Taiwanese identities.

In both parts the opening of a space in the world extended outward/inward to new participants;

artwork as the opening of a world, open up space to voices-expressions ~ a world of voices,

a world of spaces; the space that a voice occupies and opens up in the listener ~ in the world/s between listener and speaker.

The videos in Part 2 show us forms of exploration being undertaken by Taiwanese artists. Not just a survey of contemporary Taiwanese art; a pool of Taiwanese identity. An image of cultural identity pooled from different sources, Taiwan, China, Japan, Southeast Asia, war, globalisation, art, internet, philosophy, memory, nature etc. etc. etc. etc. a meshed and stirred pool absorbing and reflecting back each sense of identity or experience. ripples touching each other; reflecting identities into each other. 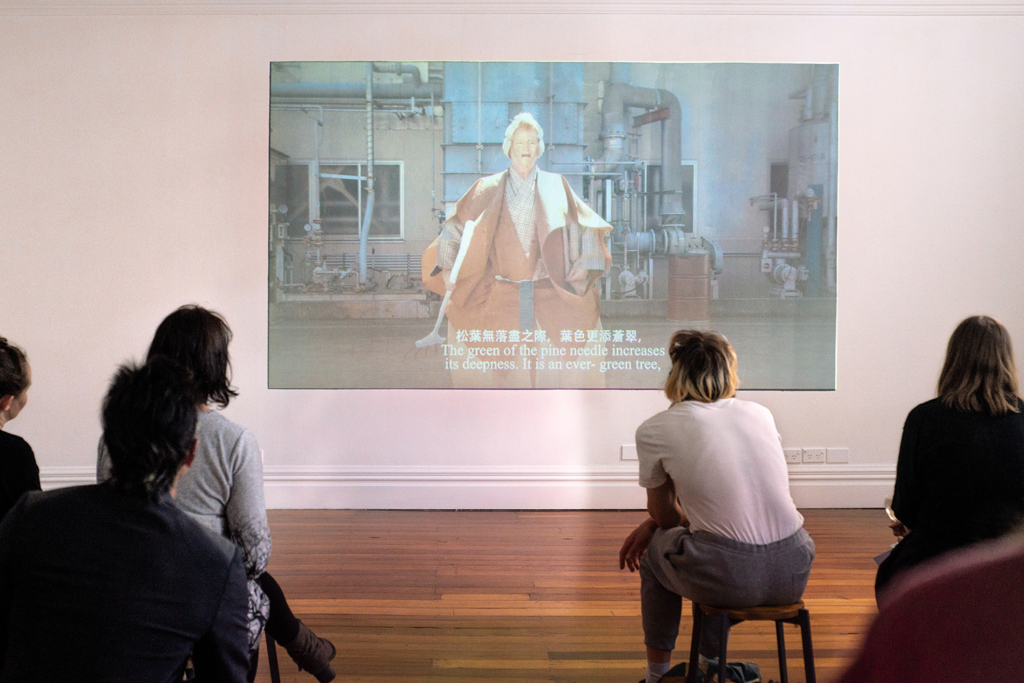 The first video Takasago looks at colonisation, ownership, naming, culture, history. Showing a Japanese Noh play, Takasago, within a Takasago chemical processing plant situated in Takasago (Taiwan as named by Edo-era Japan), + the narrative of the play revolves around two lovers who live thousands of miles apart, so their relationship is called into question. Who defines the boundaries of a relationship? Love? Property/propriety? Possibility? Decided with rules? Force? So is Taiwan separate from Japan now? From China? From itself?

Vs. the inside of an office or a bank, or a government building or prison cell. At what point do bubbles pop?

Is New Zealand separate from the world? England/Europe/America/Asia/Australia? Is it separate from the Pacific/other islands in the neighbourhood? From Taiwan? What is so scary about that? The white people born here are also people from a Pacific island. But from birth we implant ourselves with mechanisms to repress and distort the information and (potential) identity we (could) receive from the environment. In the same sweep as repressing or suppressing or oppressing or moderating anyone or anything that ‘looks’ Pacific. #box

Not absolutely but enough to make it painful and dysfunctional. With cultural practices inherited from England/Europe that are disconnected from the environment (and the existing cultural practices that were developed in collaboration with it). And still in the ways we tell and represent and privilege histories-experiences, divide up land/possession (whether or not they are ‘given back’). The prime minister’s still white, the system’s white, the bank vault’s white, each bar in the prison is white, the gallery walls are white, the curator’s white. And I’m doing it right now writing about this show lol #historicisation #documentation #narrativisation ~

So it’s not 100% clear whether or not Enjoy knows what conversation it’s having there. Or what the impact of the exploration being undertaken by TCAC and their community would be (were it to properly emerge here and not be swept up into curatorial/conceptual banter). And it may not be something the more complacent areas of New Zealand art want to unearth. The political, social, historical threads being drawn out by the artists and artworks in the show go a bit beyond the walls of the gallery and the safety of discursive explanation and justification. Not in a way that would necessarily disturb or break the stride of the gallery, but that could be overlooked by a narrower view. + it’s what we don’t know that’s gonna hurt us I reckon. I repeat because I repress, I repress because I repeat #freud.

Liu Yu’s Somehow I Felt Relaxed Here uses a historical narrative mashed with ruin-porn-esque footage and game footage to pull the viewer into a space both into and out of tangible reality. A space between the comfort of familiar narrative as truth and unknown or hidden history as truth. Exposing hidden narrative, and blurring it with digital fantasy and fiction in the same swoop. Showing a factory bombed by America in WW2, and a man who was there at the time describing the event. Which game is he from? Which is important, truth or narrative? Familiarity or change? Ethics or comfort? Where do personal and national identity sit in between them? 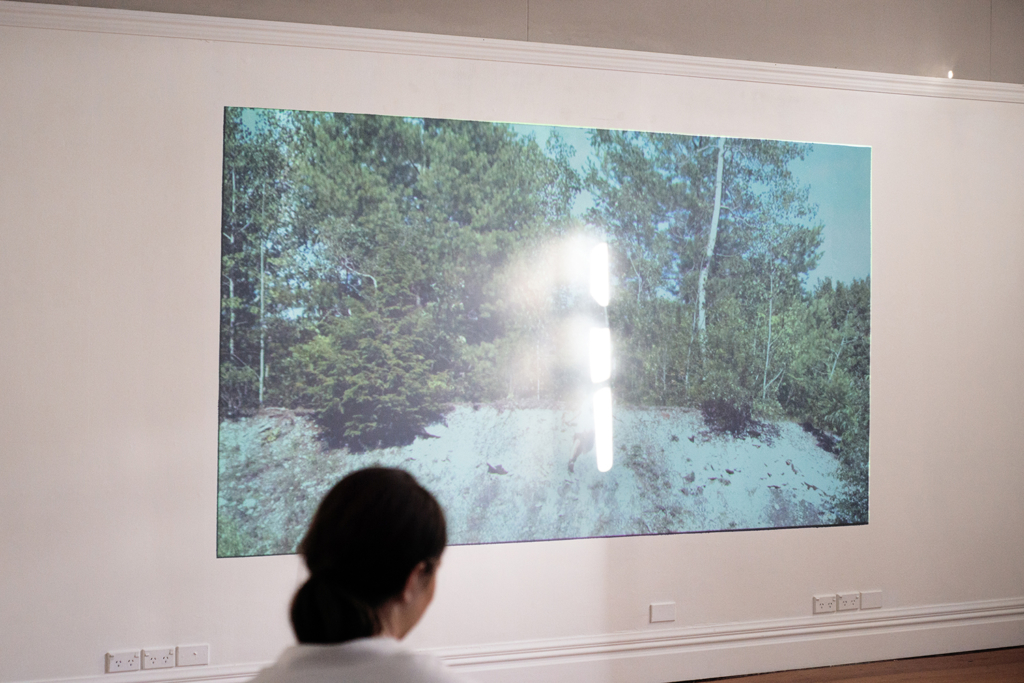 Whereas Tzu-Huan Lin offers a more playful exploration in his video The Yellow Snake is Waiting. The ongoing voiceover takes us through a series of narratives and image sequences. Though also meandering through history, philosophy, science, media; Zhuan Zi’s “was it you dreaming you were a butterfly, or the butterfly now dreaming it’s human?”, Chinese folklore, The Smiths’ karaoke, and winding personal speculation. Though the content is broad and covers many universal and contemporary problems, the space feels very internal and personal, like being inside his head. Internal/external, physical/digital, self/other, emotional, spiritual, existential are blended into the psychic space of the video in which the viewer is absorbed.

The show produces experiences for the viewer that are not found as readily outside of the gallery or ‘art’. though even then is the space open? should it be? could it be? would it be? to what?

Open to art-voice-experience-identity? A channel for each to be processed in, or for things to be processed into art? What conception of art, or an art colonised by what? It depends on the space and the people… /should/could/would.

Does the stream run into the gallery? Does food grow in the gallery? (No.) It’s hard enough to even find a Māori face in there. Or many other signs of diversity. Is it the gallery that we need at all (as such)? How contemporary is contemporary?

Something many of the responses to the survey call for explicitly is diversity, access, acceptance. Everyone is looking for a space to be represented ~ a voice that represents them.

But the identity of the institution itself (e.g. gallery) also wants to emerge in the world: who the space is, who its friends are, memories, repressions, fears, traumas, sexuality, interests. 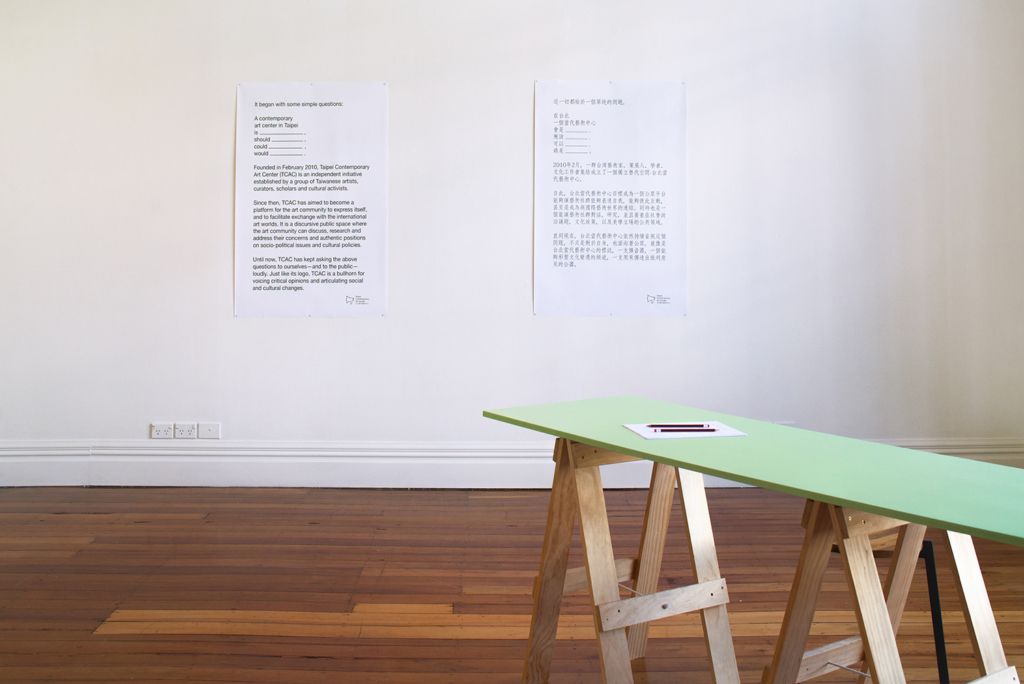 need to lock it down. *know* it

Much obsessing over identity. The identity of different molecules over what people are living and experiencing in the world. The names of identities over embodied states. Identities of words or notions. Diverging from the reflection-exploration-experience I should-could-would be doing.

In his talk Bochun’s like “I hope one day we don’t have to have these conversations.’’

But they’re created out of the pressure on identity which is being increased by many systems-industries-practices including art. And also people aren’t quite ready to let go of or be let go of by the confines of their identity. Same reason people join the army; bomb the paper factory, colonise the island etc.

Government, work, police, politics, healthcare, philosophy, school etc. are great ideas too before the tipping point where the details of the description become more important than the execution or the experiential impact.

Try to transmit experience through to the audience without the bureaucracies of language or culture or government. Not really though but maybe a bit less bound by their attitudes ~ hopefully. But then submit it back to the father-as-capitalism, -as-coloniser, for approval-evaluation-reflection.

Kuo Yu-Ping’s pieces in the show also raise a more personal voice, featuring memory imagery as her main medium. In the two paintings, point-of-view angles inside a car (Pale arm with nickel plating and Family Letter), and accompanying them from the video (Eastern Messiah), a model of the Sun-Yat-sen Freeway, from her own memory. The commentary is not explicit in the video, and takes a back seat to personal imagery. The political commentary represented in the highway growing outward from her own personal experience. 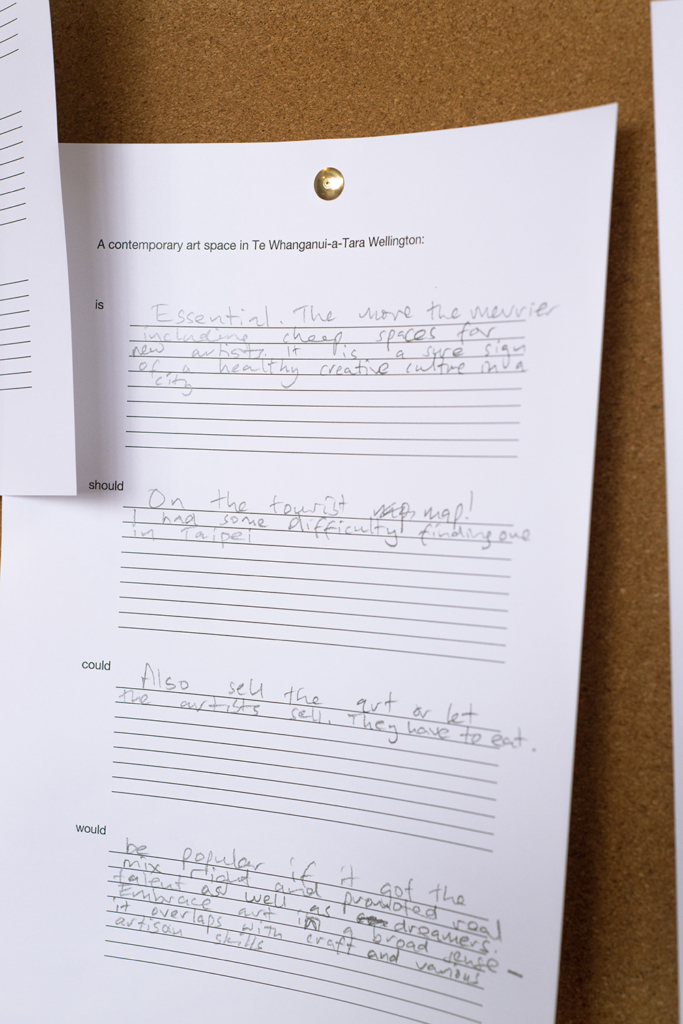 Is the sense of identity then self explanatory; simply arising out of the self and its produce? Are the voices calling for expression in the gallery/world/survey interested/engaged/inspired/motivated/satisfied by the worlds-possibilities opened to them by the content in the/a show? Whether by video/imagery/narrative as passive expression or answering questions posed directly to them ~~~~~~

is what is both being asked and what is being reflected by the audience. The chance to engage is a chance to assert a position as-identity. So is the chance to show at a gallery, so is the chance to walk down the street; and people are glad for the veil of art to speak under. If it doesn’t have to be ‘me’ or ‘my identity’, it can be art and art’s purpose or impact on the world.

The gallery needs pets: frogs. why? because i want it. is it to do with art or the gallery as such? no. is it to do with my position and attitude in the world? of course: no more art. cute. why not? Then, was it you dreaming about frogs? Or the frog now dreaming that you’re an artist?

Industry in general and including art arrives as a chance to be involved, make personalised assertions in what is seen to be the world from one’s own perspective. Alleviate the pressure on identity. Is that world? doesn’t matter. (Also yes, because that is the extent to which one knows world in the first place and all other places.) Is it art? can it be art without being world?

Is it me that is dreaming about identity? or that is being dreamed by identity?