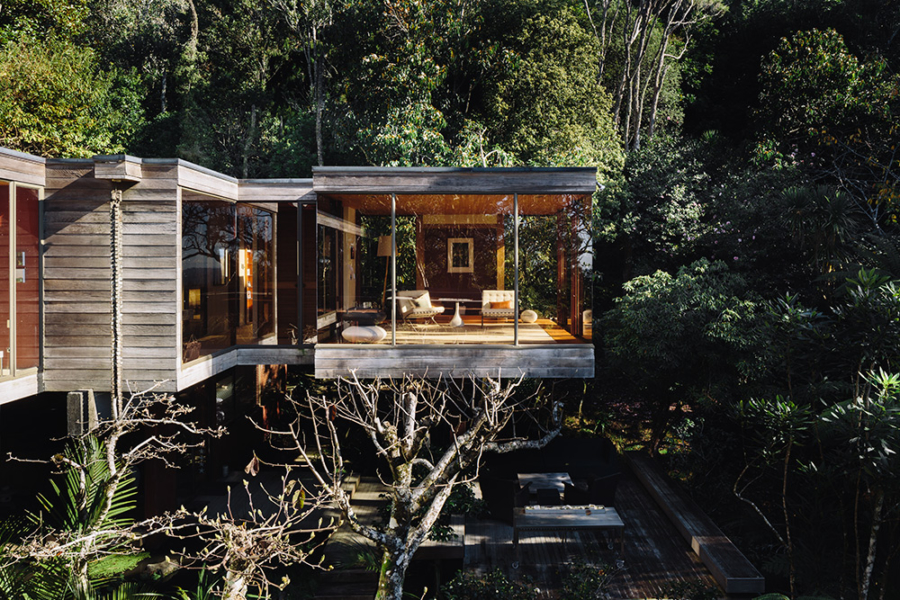 The Brake House is a landmark of Aotearoa architecture. It was a category 1 heritage listing building, has been awarded several architectural prizes and is integral to the history of architecture in this country. However, viewing the Brake House as a meeting-point between professional and cross-cultural exchange makes the home a conceptually complex site. Brian Brake commissioned the residence to be built by architect Ron Sang. Brake’s photographic career and the wider response from the public about this home speaks to our larger consciousness about multiculturalism.

To put it plainly, this home was built for a Pakeha man who built his career showing non-western culture to the Western world through his lens. He wanted a home constructed in the style of a Japanese farmhouse, and proposed the design to a Fijian-born architect of Chinese descent that he met through a mutual friend, also of Chinese descent. These complicated racial relationships, in conjunction with their roles as professionals in fairly elite lines of work, creates a complicated conversation centred around the architectural site of the Brake House.

Brake was one of Aotearoa’s most significant documentary photographers – he documented treasures of many cultures: Maori taonga, the pyramids in Egypt, statues of Buddha in Sri Lanka, children in India, ceremonies in Kyoto, Japan, Milford sound – the list goes on and on. The Wellington born photojournalist even took photographs of celebrities and household names like Pablo Picasso and Sir Edmund Hillary. In 1957, he became a member of international photographic cooperative Magnum Photos and eventually travelled the world to take photographs that would be featured in magazines such as Life and National Geographic.

Brake was introduced to architect, Ron Sang, by the sculptor Guy Ngan in 1974. Born in Fiji in 1938 to immigrant parents from Southern China, Sang spent most of his teenage years in Fiji, until moving to Auckland at the age of 19. After spending many years of his career as an employee in other firms, Sang decided to branch off with his colleagues to create their own firm Mark-Brown, Fairhead & Sang. It was in 1974, when this home was designed that Simon Carnachan joined the firm and worked with Sang to create a design for Brake.

Brake had already purchased a plot of land in the Waitakere Ranges, a rocky, mountainous terrain covered in native trees. When Brake approached Sang about building a home, he already had a plan in mind for the land. Brake had asked a few colleagues to design a home for this land prior to asking Sang, but ultimately he selected his design. Brake wanted a Japanese farmhouse (minka). Although Japan is a small country, the style of minka differ between regions dependent on variations in the environment. However, the ground minka are usually built on are flat lands1 using large thick beams that hold up the structure. Immediately after seeing the grounds that Brake wanted to build on, Sang knew this kind of structure would not work physically nor aesthetically.

In addition to the technical problems the design faced, Brake’s minka didn’t compliment Sang’s architectural style—he was interested in Modernist architectural style and took inspiration from architects like Richard Neutra and Harry Siedler, who designed rectangular often cantilevered, flat roofed buildings. Some of which had sections extending from the main structure that were constructed so that they would look as if they were floating. Knowing Brake’s vision would not be feasible, Sang and Carncachan, brought forward a design that was similar to the final layout of the Brake House.

In many of the texts written about the home, the one feature that is continually mentioned is its Asian influence or style – referring to Brake’s career surrounding Asia. However, Sang chose to compromise on this project by not designing the minka that Brake desired, but instead incorporating aesthetic and structural elements that Brake favoured. He used Asian influence throughout the home, but not to the extent that Brake had initially wanted. He used techniques common in Asian architectural design to construct the home so that it would also work with the physically steep of the ranges, and that was also aligned with his modernist interests. Guy Ngan even had some creative input into the house, incorporating contemporary Chinese New Zealand art influence into the structure. This allowed the home to move even further away from the rustic and traditional design Brake had in mind. 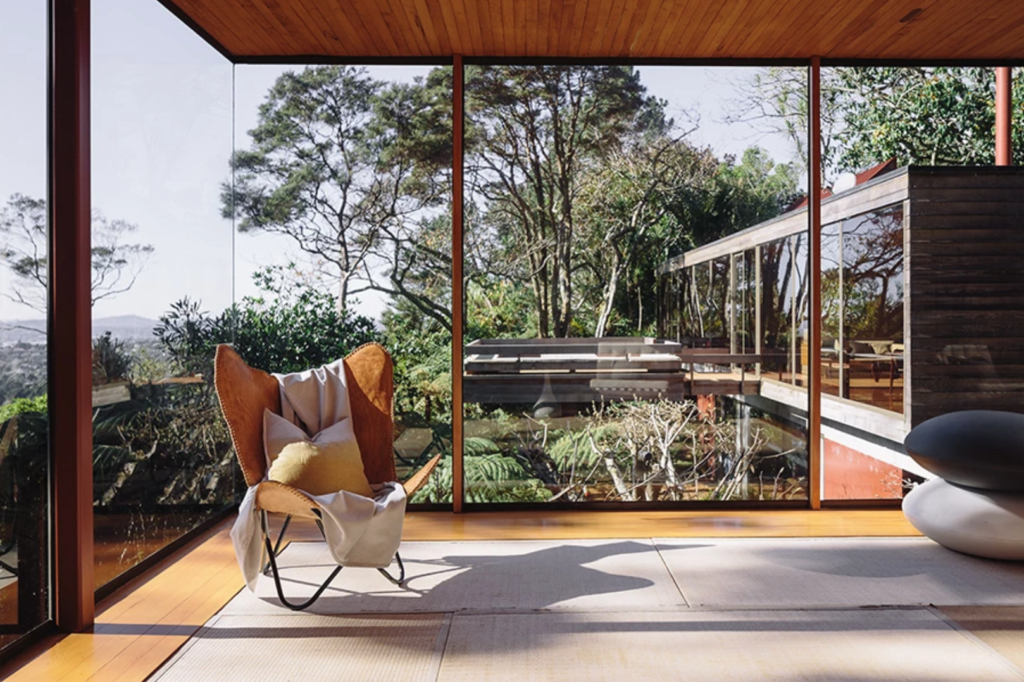 The tatami room in the Brake House. Photo by Simon Wilson

This developed into spaces like the tatami room (washitu) that extends from the side of the main structure supported by a singular vertical beam from the ground to the underside of the floor. Tatami are layered rectangular mats that are one standardised size and are arranged to indicate room size. It is not stated whether the Japanese elements of the home that was included in the design of the house was information that Sang or Carncahan knew about prior to the project, or whether it was researched in order to incorporate them into the home. However, Sang used his interest in Asian modes of architecture and interior design, specifically feng shui, a Chinese tradition of spatial harmony that influences the selection of a site, to inform the layout of a building and its interior design.2 As a design practice in this home, and others he has built, feng shui compliments his architectural modernist training and influence. Using large doors as a means to let energy in.

This home’s amalgamation of several different styles and cultures speaks to the dubious circumstances that brought this project to Sang from the outset. It is fairly commonplace that in Eurocentric cultures that non-European cultures that are close regionally will often be confused for one another or homogenised. According to the out-group homogeneity effect, out-group individuals are perceived as more similar to each other than to individuals that are part of the in-group, which leads to overgeneralized stereotypes of out-group members. If a group is overgeneralized then it can lead to a failure to acknowledge the diversity in that group and underestimates the variability that exists within it.3 This is not to say that Brake believed Sang was Japanese, and therefore had the cultural knowledge to build his desired home. Instead, it is more aligned with the suspicion that he believed Sang would have that knowledge because he was Asian – echoing the unflattering cliche that all East Asian cultures and their cultural knowledge are essentially interchangeable.4

Brake offered an exotic and fantastical perspective of many cultures. Stereotype has been described as both fetish and phobia which makes colonial fantasy more accessible and closes off the potential for building discourse about culture and race within people of colour.5 Sang was able to utilise his knowledge of feng shui6 to reflect a Chinese theory of architecture in the home, and by doing so began a discussion about Asian influence in modernist architectural design. However, the rhetoric that is found in Brake’s photographs has continued into the discourse surrounding the house, further prompted by its association with Brake and his photographs.

Fellow photojournalist, Steve McCurry, saw Brake’s photo essay on India’s Monsoon season and thought, “wow, this place is incredible. It’s this faraway land, it’s very exotic … and the dramatic weather. It just really captured my imagination.”7 In essence, this home was a different kind of Asian fantasy—described as “reflecting Brake’s love of Asia”. The home is now available as a luxury airbnb and in the description within the ad it suggests engaging in morning yoga or a massage in the tatami room or even a “perfect local pinot by the open fire.” At $2,400 a night, the short-term renting of this home allows access to specific aspects of Asia to a privileged few, without having to leave the Eurocentric comforts of Aotearoa. 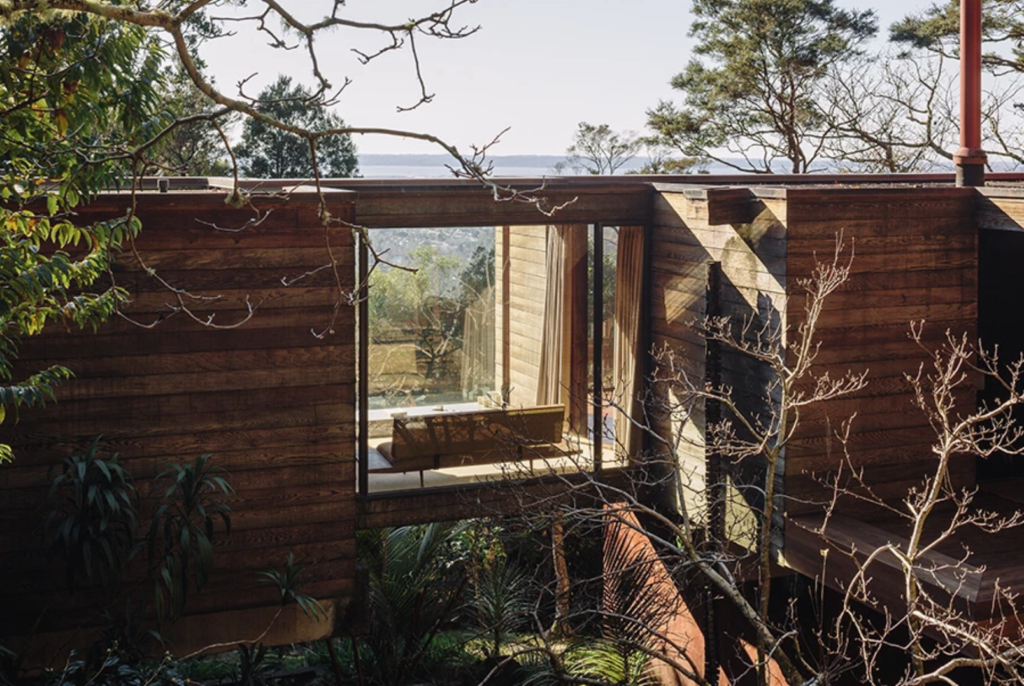 The discussions about the Brake house are almost solely within the fields of art and architecture, both industries that are mainly made up of privileged individuals who have little contact with marginalised people who have real knowledge of non-Western practices. Emma Ng states in Old Asian, New Asian that the Human Rights Commision found “one in two New Zelanders feel the recent arrival of Asian migrants is changing the country in undesirable ways.”8 These undesirable migrants are the working-class, much like the subjects in Brake’s images—the farmers, merchants and artisans in Japan that occupy minkas out of necessity, instead of a luxury. These migrants are already well represented in our population, but unfortunately aren’t greeted with the same embrace as the images of their cultures shown through the Brake house or Brake’s photographs.

Perhaps there is room to question Sang for encouraging these negative connotations, since the houses design, with the association of Brake’s career, contributed to the exoticised and generalised language that continually comes up in discussion about the house. Additionally, allowing Brake a further opportunity to situate himself alongside an idealised Asia distanced him further from the people which he profited from. However, it can also be said that it was not Sang’s responsibility to alter his design to a Eurocentric audience or anticipate their reception, but instead to create a house where he could apply his cultural and architectural knowledge— home that immensely benefited his career, and consequently, gave him the ability to support the larger Chinese and Asian communities in Aotearoa. Currently, his firm Sang Architects is a family-based firm, made up of a multi-lingual team that are of Chinese, South African, Iranian and Hong Kong descent.9 He is a donor to the Chinese Lifeline, a trustee of the Chinese New Zealanders Millennium Trust in addition to other charitable organisations to which he donates.10 His support of the art industry in Aotearoa is vast. He is a collector of mostly sculptural pieces, he is a patron of several art galleries and he founded his own publishing house that almost exclusively publishes art monographs of Aotearoa artists. His cultural mark in these various fields is significant and has become an important figure in our collective culture.

Ultimately, he did compromise with Brake on the house – steering him away from what would’ve been a design that epitomised cultural appropriation and fetishisation. Instead, he and Carnchan offered him something that was more appropriate culturally and physically, culminating in a complex, tangible structure and site of conversation. The Brake House was able to put an Asian inspired home into the national dialogue, which continued into our national dialogue about art, photography and architecture.

3 Quattrone, George A., and Edward E. Jones. “The perception of variability within in-groups and out-groups: Implications for the law of small numbers.” Journal of Personality and Social Psychology 38, no. 1 (1980): 141.