It’s not outlandish to say I was raised by the water.  Aotearoa is a land mapped in blue pen, each land mass a riverbed. Originally swampland, the water gurgles from kitchen taps and runs silent cartographies underneath cities of concrete.

I was raised by my mama, raised with the treasures of every good cross-pollinated pantry. We have rice porridge for breakfast and mee hoon kueh when I plead. My siblings and I vie for iced jewel biscuits kept out of our reach, packed tightly into red-lidded jars on the highest shelf of our pantry. We stretch torso to tiptoe to reach them, knocking the jars off their perch with our fingertips. The dried goods we ignore on the levels below are the real jewels in the cabinet. From behind the creaky door comes the festivities of Lunar Celebrations: dried mushrooms, dried shrimp, vermicelli noodles, black fungus, herbal remedies, that good luck moss you eat on New Year’s.

Chinese cooking is a testament to soaking. Benches overflow with an array of colanders, damp towels cover small white bowls of noodles, rehydrating. We wash rice in liquid choreography: Pour. Swirl. Measure by the pinky. Drain.

My mum is from Ma Lai Xi Ya, her mum’s mum from Fujian, China. I google map the curve of a bordering coast, trace a line through the wet season pavements of Kuala Lumpur and end up with fingerprints all the way to Oceania. From my house you can see the windmills of Makara, jutting out like acupuncture needles. The sea rushes the wind like nature’s boxing lessons.

We fly back to Malaysia every couple years, past the sea-lapsed boundaries of other countries. In Singapore I am offered moist towelettes on the plane. In KL, where two rivers meet by the oil of Petronas, I shower in buckets of cold water and reunite with faulty flushing.

The first ethnic Chinese came to New Zealand during the 1850’s, following flakes of fortune. They came for the gold rush, fishing for luck on the unturned beds of rivers. Wisps of fortune lay in thousand year old rocks worn down to alluvial alchemy.  Chinese last names carried through the cold water creeks. They died in sea-burials.

Tones and tombs. You made your river, now lie in it. Yǐn shuǐ sī yuán. To think of water and remember its source; to remember where one’s happiness comes from; to not forget one’s roots or heritage.

Oriental Bay is the closest beach to us in Wellington City. On weekends, we drive out for picnics, happy to migrate our schedules. The beach was named by George Dupper in the late 1840’s after the boat he arrived on. Fresh off the Bay. Oriental Parade is famous for 22,000 tonnes of imported sand. In my house we are displaced soil in torrential rain. I search ancestry on Wikipedia, then look for my own last name.

Think of water and remember its source. Where do our pipelines go? When do our bodies enter the main frame? Oriental, noun. Characteristic of Asia, particularly the East. Rugs, countries, bamboo leaves. A person of East Asian descent (offensive).  A beach with fake grains. Imported goods and exported gooseberries. The fruits of our labour, measured and drained.

Year of the money. Year of the pig. Year of the scapegoat, the migrants, the rats on the ship. Labour. Lei. Qi Guai. Guai Lo. I google the wind howls around a shipwreck. I google microtraumas until my eyes bleed transparent. I google:

Ink blue motions stencil sight lines into the harbour of my eyes. I rub at ink sticks until the ocean turns to soot. The rising shadows of New World Power loom from water’s depths. We float currency back to motherlands in a trickle down economy.  What’s the pH balance of yin + yang?

I was raised with the dawn promise of an unpolluted skyline, pools in cyan-printed eyes, long white dreams of the colony. My body the cycle of a washing machine, bleached into safety. I was raised in a world full of oysters, one lofty pearl held between the whiskered snout of a dragon. But you can’t feng shui the comments on Stuff articles.

Feng shui just means wind water. It’s not scary. Duān wǔ jié is the annual dragon boat festival. I throw zongzi in the river to protect Qu Yuan’s body. Remember how you moved across the world to know you had been here already? My mum says she caught sight of the harbour and it’s why she will never leave. I watch her from the doorway, her frame hunched across the sink. She belongs here. The soft light of morning streams through the window, catching glints on small rice bowls. I can hear a pot of water boiling. She soaks bones for breakfast, then asks if I’m hungry. 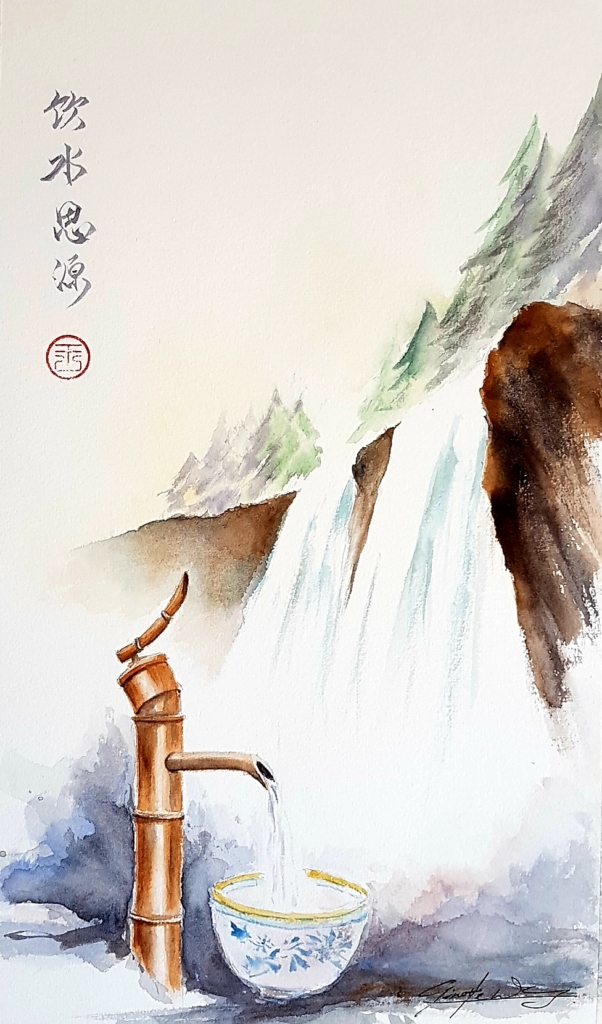